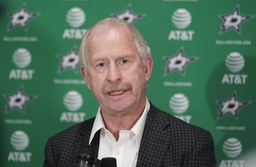 Nill is going into his 10th season with the Stars, which was the last year on his current deal before the extension announced Tuesday. Dallas has made the playoffs three of the past four seasons, and advanced to the Stanley Cup Final two years ago.

"He's re-shaped our club to put us in a position to compete with the league's best each and every season," Stars owner Tom Gaglardi said. "Jim's diligence and commitment to the Stars has reverberated throughout our entire organization and we're excited for him to continue his work building a championship-caliber team."

The Stars have a 356-259-84 record with five playoff appearances overall in Nill's nine seasons.

"While we have made some big strides toward our ultimate goal, I am eager to continue my work in developing a winning culture that ultimately brings this team and this city a championship," Nill said.

The Stars in June hired Peter DeBoer as the franchise's new coach. DeBoer, who has twice gone to the Stanley Cup Final in his first season with a new team (New Jersey and San Jose), is the fifth Stars coach since Nill became GM in April 2013.

DeBoer replaced Rick Bowness, who was the interim coach when the Stars made the Cup Final before a two-year contract that went through last season.

Nill initially went with veteran coaches Lindy Ruff (2013-17) and Ken Hitchcock (2017-18) before hiring Jim Montgomery from the University of Denver for his first NHL head coaching job. Bowness took over when Montgomery was fired because of off-ice issues early in the 2019-20 season.