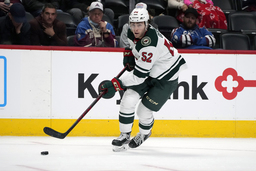 Dewar made his NHL debut on Oct. 28 and played in 35 games, with two goals, four assists and 48 hits while playing on the fourth line. The Canadian blocked five shots at Winnipeg on Feb. 8 to tie a franchise single-game record for a rookie. He appeared in one playoff game.

The 23-year-old Dewar, who was a third-round draft pick by the Wild in 2018, got a one-way contract. He played in 19 games in the AHL for Iowa last season, with eight goals and nine assists.