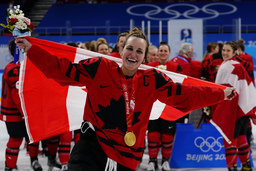 The role with the NHL team will be part-time as Poulin, a four-time Olympic medalist with Canada's national women's hockey team, continues her playing career.

"Marie-Philip is one of the best players on the planet and she has won at the highest level, which will be very beneficial for our players," Canadiens general manager Kent Hughes said Tuesday in a statement. "Her knowledge, leadership and vision of the game certainly make the Canadiens a better organization."

The team says the 31-year-old Poulin will join the players on the ice and in video sessions to work on their individual and collective skills.

"She is the best in her field, and her accomplishments will help us build a winning culture within the Canadiens," team owner Geoff Molson said in a statement. "Her arrival is another step towards achieving the diversity that we want to establish within our organization."

Poulin has won 15 medals in international competitions, including three gold medals at the Olympics, where she became the first hockey player to score a goal in four straight finals.

She scored the gold-medal winning goals for Canada at the 2010 Vancouver Games, 2014 Sochi Games and 2022 Beijing Games. Poulin tallied two goals and an assist in Canada's 3-2 win over the United States in the Beijing final in February.