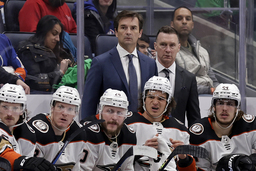 ANAHEIM, Calif. (AP) The Anaheim Ducks are keeping head coach Dallas Eakins in charge next year for his fourth season with the struggling club.

The Ducks are finishing up their third consecutive losing season under Eakins, who got the job in June 2019. Anaheim is 29-33-12 heading into its game at Florida on Tuesday night.

The Ducks were in the Western Conference playoff picture this season until the All-Star break, when they began a 6-17-3 skid that has all but guaranteed they'll miss the postseason for a franchise-record fourth consecutive year.

"Dallas has done this job under difficult circumstances and deserves the opportunity to continue coaching this team," Verbeek said in a statement. "We are pleased he will be returning and look forward to a promising 2022-23 season."

Verbeek has decided not to make an immediate coaching change after taking over the franchise just two months ago. Verbeek replaced longtime GM Bob Murray, who resigned amid misconduct allegations.

Eakins is just the third permanent head coach of the Ducks since billionaire Henry Samueli bought the team in 2005. Randy Carlyle led Anaheim to its only Stanley Cup title, while Bruce Boudreau won four consecutive Pacific Division titles during 4 1/2 seasons of sustained success.