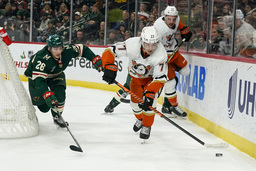 ST. PAUL, Minn. (AP) Kirill Kaprizov and Matt Boldy scored in the shootout, helping the Minnesota Wild to a 5-4 win over the Anaheim Ducks on Saturday.

Calen Addison and Joel Eriksson Ek each had a goal and assist during regulation as Minnesota won for the fifth time in six games and closed out a seven-game homestand. Connor Dewar also scored for the Wild, who have beaten Anaheim in 12 straight matchups, the longest streak against any opponent in team history.

Filip Gustavsson made 29 saves for Minnesota, which rallied with two goals in the third period, including Kaprizov's tying goal with 2:35 remaining.

"We're going to take two points, for sure," Wild coach Dean Evason said. "Two periods we were not very good and they were good. . We were able to come back and we're very fortunate that the game wasn't out of hand by the time we got to the third period."

Trevor Zegras and Troy Terry each had a goal and assist in regulation. Zegras was Anaheim's only scorer in the shootout.

Anaheim missed a chance at just its second win in regulation this season when Kaprizov tied the game late. Five of the Ducks' six wins this season have come in overtime or the shootout. The lone regulation win came Nov. 23 at home against the New York Rangers.

"It's one of those games like, man, you really want to get both points so that the team can feel rewarded for a good road game," Anaheim coach Dallas Eakins said. "Overall, we did a great job. Goaltending was excellent straight across the board and those are important to try to get both points so there's a reward. But coming into a building like this and grabbing a point is certainly a step in the right direction."

Addison's second goal of the season opened the scoring for Minnesota 4:37 into the game on a fortunate bounce. Addison's point shot deflected off Anaheim forward Max Jones into the goal.

A two-goal second had Anaheim looking for a rare regulation victory. Fowler scored his third on the power play and Zegras followed with his ninth of the season. It marked just the second time this season the Ducks have led after two periods.

"I thought tonight we actually did a better job of when we had the lead and we weren't just in protect mode," Terry said. "I think we've done that whenever we've had the lead this year, we've stopped kind of pushing the other team and just kind of sit back. And tonight, I thought we got a lead and we had a lot of really good chances to make that a two-goal game."

But Eriksson Ek tied the game 5:26 into the third with his eighth goal.

Terry scored his team-leading 11th goal to put Anaheim back in front before Kaprizov's tied the game again.

"The first two periods weren't very good for us," Wild defenseman Jared Spurgeon said. "The third period was more of the way we want to play."

Kaprizov's third-period goal extended his point streak to a career-best 11 games. He has seven goals and 11 assists in that span, including five straight games with a goal. He did have his assist streak of nine games snapped.

Ducks: Finish a four-game trip with the second game of a back-to-back Sunday in Winnipeg.

Wild: Play the second game of a back-to-back Sunday in Dallas.