Comeback Cats do it again, rally to top Caps 5-3 in Game 5 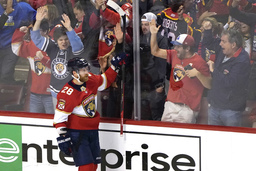 Verhaeghe set a Panthers franchise playoff record with a five-point night - two goals, three assists - and the Comeback Cats pulled off another rally, this one obviously the most important of their season. Florida erased a 3-0 deficit to beat the Washington Capitals 5-3 on Wednesday night, taking a 3-2 lead in the teams' Eastern Conference first-round series.

"Things are going pretty well right now for me," said Verhaeghe, who helped Tampa Bay win a Stanley Cup in 2020. "And the team. We're up 3-2, we have two chances to win one game, things are looking pretty good."

"Giving up a three-goal lead, I don't know how many times we've done that this year," Oshie said.

The answer would be twice.

Both times, at Florida.

Verhaeghe broke the Panthers' playoff scoring record that Ray Sheppard set on a four-point night back on April 22, 1996 - which remains the last, and only, season in which the Panthers won a playoff series.

They can change that Friday, when Game 6 is played in Washington. Game 7, if necessary, would be back at Florida on Sunday.

"We didn't start the way we wanted to ... then we started to play the right way," Barkov said.

Verhaeghe gave the Panthers the lead to stay at 3:04 of the third, after a pair of marvelous plays at both ends. He created a turnover deep in the zone, sent the puck to Barkov and then went into a full sprint for about 100 feet of ice to find a spot to receive the return pass.

Barkov put it on his stick, Verhaeghe put it into the net, and Florida led 4-3. Bobrovsky slammed the door from there, Giroux scored the insurance goal at 15:55, and the Comeback Cats had done it again.

"Felt like we gave that game away," Washington's Nicklas Backstrom said.

This was the season of the comeback for Florida, which had an NHL-best 29 come-from-behind wins during the regular season. The Panthers pulled off five wins after trailing by three goals, and rallied in the final moments of Game 4 to force overtime in Washington before winning early in the extra session and tying the series.

Florida's rally matched the largest in an NHL playoff game since April 19, 2011, when the San Jose Sharks erased a four-goal deficit to beat the Los Angeles Kings 6-5. There had been three two-goal deficits in these playoffs entering Wednesday, but nobody had successfully dug out of a three-goal hole.

Oshie opened the scoring at 7:09 of the first, doing what he probably does best -- redirection. He set up in the slot, obstructing Bobrovsky as best he could, then changed the flight of a shot by John Carlson just enough to get it into the net for a 1-0 Washington lead.

It stayed that way until the second, when two goals in a span of 1:25 looked to give Washington full control. Schultz found a crease within a maze of bodies in front of the net and blasted the puck through to make it 2-0, and Oshie finished off a pass from Kuznetsov on a 2-on-1 break to make it 3-0.

And that's when the Panthers did what they do best - rally.

"There's two games that were played," Washington coach Peter Laviolette said. "There was a game to push it to 3-0 where I liked everything we did. ... And then there's a game that took place after that."

In a span of 7:51, Florida went from down three and in huge trouble to tied going into the third. Verhaeghe watched the puck come off the end boards and batted it in to get Florida on the scoreboard. Hornqvist went over Samsonov's glove on a breakaway, and the equalizer came from Reinhart. He picked up a loose puck at the edge of the crease and tapped it into the back of the net to make it 3-3 going into the third.

The Capitals were 20-1-0 in games when they led by at least three goals at any point this season, including playoffs. The one defeat - Nov. 30, when a 4-1 lead going into the third became a 5-4 loss.

The opponent that night? That would be the Panthers.

"I thought we started taking over the game like we've done so many times this year," Panthers interim coach Andrew Brunette said. "Showed our resiliency and belief that we're in any hockey game."

Florida's last 3-2 series lead was a decade ago, the 2012 first round against New Jersey. The Panthers lost Games 6 and 7, the finale at home in double overtime. ... Florida went 0 for 3 on the power play, dropping the Panthers to 0 for 16 in the series and 3 for 26 against the Capitals this season. ... Florida's longest stretch of games in the regular season without a power-play goal was seven, from Nov. 8-20. The Panthers had at least one man-advantage goal in six of the final seven games of the season, but remain blanked through the first five games of this series. ... Oshie had the sixth multi-goal playoff game of his career.

Game 6 is Friday in Washington.