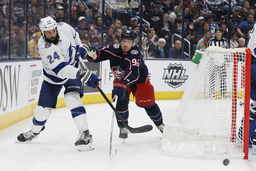 COLUMBUS, Ohio (AP) Oliver Bjorkstrand led Columbus with a goal and an assist in the Blue Jackets' 5-2 win over Tampa Bay on Thursday night that kept the Lightning from clinching the No. 3 seed in the Atlantic Division.

Tampa Bay has a one-point lead over Boston with one game remaining for each team. The No. 3 seed will play the Toronto Maple Leafs, and the other will get the East's No. 1 wild-card spot and a series against the Carolina Hurricanes.

"It just wasn't in the game plan tonight," Lightning coach Jon Cooper said of the loss. "It's unfortunate. You play 82. Sometimes you're going to get those."

"This was really important for us to have this win, especially for our fans," Merlikins said. "They deserve it. They were all season super loud for us, supporting us even in bad times, and good times. For me, it was really, really important to win this game."

Voracek put Columbus on the board with four minutes left in the first with a one-timer from the right circle off a perfect feed from rookie Kent Johnson, who notched his first NHL primary assist.

Tampa Bay had a first-period goal waved off due to goaltender interference and finally found the back of the net when Kucherov notched his ninth power-play goal of the season at the midway point of the second period.

Roslovic made it 3-1 and extended his point streak to six games with a power-play goal 15 seconds into the third period after Pat Maroon earned a pair of minors for slashing and roughing Merzlikins at the end of the second period.

Columbus went up 4-1 at 9:05 of the third after Bjorkstrand grabbed the puck along the boards and skated in on Elliott, surprising him with a wrister.

"This is what I expected from this group," Blue Jackets coach Brad Larsen said. "They dig in. We have done it all year. We said we were going to play right to the end, and they have been."

Tampa Bay pulled Elliott and made it 4-2 with a 6-on-4 power-play goal from Perry at 16:54 of the third, before Peeke scored the empty-netter with about two minutes left.

Kucherov extended his goal streak to seven games, matching his own career high and tying him with Brian Bradley for the longest streak in franchise history. It is also the longest active goal streak in the NHL.

Stamkos' assist on Kucherov's goal was his team-leading 63rd of the season and the 490th of his career, putting him one short of tying Vincent Lecavalier for second among the Lightning's all-time leaders.

Voracek's goal marked his team-leading 60th point of the season, but only six have come off goals. He leads the Blue Jackets with 54 assists, the most ever by an NHL forward in a season while scoring less than 10 goals. The goal total is Voracek's lowest since he entered the NHL in 2008 and his third highest total in assists (29 on 2014-2015 and 65 in 2017-2018).

Columbus defenseman Zach Werenski suffered a broken nose in Tuesday's game against Tampa Bay. Nick Blankenburg took an upper body shot in the same game. Both were out of the lineup and will not play in Friday's season finale at Pittsburgh.

Roslovic set a Blue Jackets record for most goals and points in the month of April with 10 goals and three assists in 13 games. He has 10 goals in the last nine games for a career high of 22.

Lightning: At the New York Islanders on Friday for the last game of the regular season.

Blue Jackets: At Pittsburgh on Friday for the last game of the regular season.