Francouz gets 2nd shutout in Avalanche's 2-0 win over Ducks 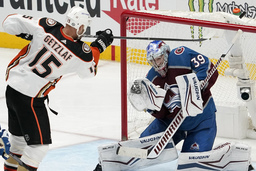 ANAHEIM, Calif. (AP) Pavel Francouz made 34 saves for his second career shutout, Nazem Kadri had a goal and an assist and the Colorado Avalanche earned a point in their 10th straight game, defeating the Anaheim Ducks 2-0 on Wednesday night.

Francouz missed the first two months due to an ankle injury, but is 5-1 with a 2.40 goals-against average and .922 save percentage on the season.

"He came up with some huge saves and is playing better the more he plays," Avalanche coach Jared Bednar said. "We didn't manage the puck well, but we did do a decent job as the game went along of keeping their scoring chances to the outside."

Both of Francouz's NHL shutouts have come against the Ducks. He stopped 26 shots in a 1-0 victory in February 2021.

"This game was similar to that one. It was tight from the start," Francouz said. "We were just trying to stay tight in our zone and that's what we were doing the whole night."

It is Colorado's second straight road shutout after Darcy Kuemper turned back 20 shots in a 5-0 win over Arizona on Jan. 15.

Girard scored his first goal in 13 games with 1:31 remaining in the second period on a wrist shot from the slot that deflected off the skate of Anaheim's Kevin Shattenkirk. Colorado's defensemen lead the league with 38 goals, including four by Girard.

Kadri, fifth in the league with 51 points, moved into second in assists with his 36th on Girard's score.

Kadri scored on an empty net with 1:09 remaining for his 15th goal of the season.

"There wasn't a lot to be had on both sides. I know we weren't generating a ton, either," Colorado defenseman Devon Toews said. "I think we're trying to get more comfortable in these close games, we're not gonna blow every team out."

John Gibson made 26 saves for Anaheim, which has lost its last four. It was his first game back in net after he missed the last five due to the league's health and safety protocols.

"I thought our guys played hard, almost to a man," coach Dallas Eakins said. "Goaltending did their job, our D did their job, our forwards worked hard to get on top of pucks and get to the net. We just couldn't get one in there."

Longtime rivals Kurtis MacDermid and Nick Deslauriers squared off for the fifth time in their careers and second time this season at 13:03 of the first period.

Both players landed quality right hands and went at it for 62 seconds before linesmen broke it up. It is the sixth fight this season for Anaheim's Deslauriers, tied for third in the league, while Colorado's MacDermid has been involved in four.

Even though both players have a history, Bednar appreciated the fight because it wasn't scripted. Deslaurier's took exception to MacDermid's hit on Shattenkirk and things got rolling from there.

"They were playing for keeps. Both of them stood in there," Bednar said. "It was fun to watch. Everyone was up on both benches and the intensity in the game picked up afterwards."

Nathan MacKinnon appeared in his 600th NHL game, becoming the fourth player since the Avalanche moved to Colorado in 1995 to reach that milestone.

MacKinnon was the first overall selection in the 2013 NHL draft and is the first player from his draft class to reach 600 games. No one else from that class has reached 500.

Colorado's Andre Burakovsky also had an assist on Girard's goal and extended his point streak to six games. The forward has two goals and eight points during his streak.