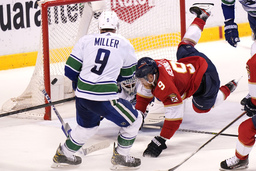 Boudreau was 8-0-1 since taking over the Canucks on Dec. 6. Vancouver was 8-15-2 when he replaced Travis Green.

"There were a lot of things we didn't do well," Boudreau said. "It's never fun when you lose, this brought us down to earth a little bit."

Aleksander Barkov scored his team-leading 15th goal and also had an assist for Florida. Aaron Ekblad had a goal and two assists, Maxim Mamin also scored, and Frank Vatrano and Anton Lundell each had two assists. Sergei Bobrovsky stopped 42 shots.

"I don't think we're doing anything special," Reinhart said. "I think we're playing a pretty simple game offensively. We're all on the same page there and we're being effective. It's a fun team to be a part of. We really feed off of each other."

The Panthers move to 6-0-1 in their past seven games.

"It's how our group has played," interim coach Andrew Brunette said. "I'm just benefitting from how they've played all year. I'm very fortunate to be in this position. I'm very grateful for the opportunity, but this is a team thing. I'm just along for the ride."

Leading 2-1, the Panthers scored twice 26 seconds apart in the second. Huberdeau's power-play goal gave the Panthers a 3-1 lead at 8:46, and Mamin's goal stretched the Panthers lead to 4-1.

Barkov scored a short-handed goal on a breakaway with 59.4 left in the second.

"They've got great stick work in front of the net, they get their stick on everything," Boudreau said. "They're a good team you can't give opportunities. If you blink, they can score."

Ekblad put the Panthers ahead 1-0 when his shot from just inside the blue line beat Demko on the glove side at 5:18 of the first.

Reinhart's goal 1:08 later - a deflection of a shot from the blue line by Radko Gudas - made the score 2-0.

Dickinson closed the Canucks to 2-1 when his shot from the left circle got by Bobrovsky with 8:29 left in the first.

There have been five in-season coaching changes in the NHL this season, and this game marked the first time two of the replacement coaches went head-to-head.

Brunette will coach the Atlantic Division All-Star Team at the 2022 NHL All-Star Weekend in Las Vegas from Feb. 4-5. ... Tuesday's game was exactly two years and two days after Vancouver's most recent appearance on the Panthers' home ice, a 5-2 Florida win on Jan. 9, 2020. ... This is the second time Florida has more than 50 points through 36 games. The other was in 1995-96, the season that the Panthers went to the Stanley Cup final.