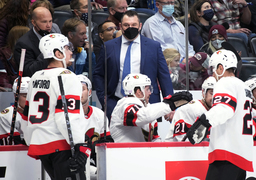 DENVER (AP) Alex Newhook scored the go-ahead goal with 1:33 left, sending the Colorado Avalanche past the Ottawa Senators 7-5 on Monday night for their fifth straight victory.

Jared Bednar earned his 193rd win with Colorado, tying Bob Hartley for most by an Avalanche coach.

"Well, it feels good and I'll take it," Bednar said. "I'm more excited about getting the two points tonight on a night we didn't play very well."

Michel Bergeron has the franchise record for wins with 265, all with the Quebec Nordiques.

Zach Sanford got his first career hat trick for Ottawa but it wasn't enough as the team played its first game in a week.

The Senators had not played since a 4-0 loss to Calgary on Nov. 14 and they were unable to practice for five days due to a COVID-19 outbreak. They got back on the ice Saturday after eight players and associate coach Jack Capuano were taken off the NHL protocol list.

Artem Zub and Josh Norris also scored and Brady Tkachuk had two assists for Ottawa, which was outshot 40-21. Filip Gustavsson made 33 saves for the Senators, who traded blows with the surging Avalanche despite the unexpected hiatus.

"First game back after five, six days off, whatever it was, and playing one of the best teams in the league and you find a way to always come back and tie it up and take a lead," Thomas Chabot said. "That one hurt."

Senators defenseman Josh Brown, one of the players activated from the protocol list, was injured in the first period and didn't return.

"Looks like he's going to be out for some time," Ottawa coach D.J. Smith said.

Nazem Kadri had a goal and three assists, Cale Makar had two goals for the second straight game and Mikko Rantanen, Devon Toews and Valeri Nichuskin also scored for Colorado.

The Senators showed little rust despite being idle. Ottawa led 5-4 on Sanford's third goal of the night early in the third, but Rantanen tied it at 9:08 and Newhook's second of the season put the Avalanche in front.

"It was a great feeling. Any time you can do that to put your team up late in the game, it's exciting," Newhook said. "It wasn't the prettiest win for us but to be able to get it done, it's a big win for us, big character win."

Norris gave the Senators a 4-3 lead early in the third and Makar tied it 1:42 later.

Colorado outshot Ottawa 19-4 in the second period but it was 3-all entering the third. Toews had given the Avalanche a 3-2 lead with a goal at 13:44 but Sanford's second of the night - on the Senators' second shot of the period - tied it again at 16:33.

"We know every single team in the league can beat each other any night," Makar said. "We had a few unlucky bounces that were going in early and us as a team, it was a lot of inconsistency. Started the game well, kind of dipped and came back up. We stuck with it."

Avalanche goaltender Darcy Kuemper's left skate blade came off when he hit it against the left post late in the second period. Equipment manager J.C. Ihrig wasn't able to get it fixed on the ice, so Kuemper had to go to the locker room and Jonas Johansson came on. Just 42 seconds later, Colorado scored to take the lead.

Ottawa: At the San Jose Sharks on Wednesday night.