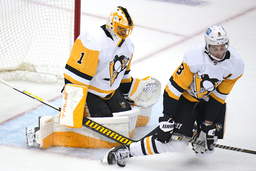 He proved as much against the Boston Bruins.

DeSmith made a career-high 52 saves, tied for the fifth most in a shutout in NHL history, and Jake Guentzel backed him up with three goals in the Penguins' 4-0 win over the Bruins on Thursday night.

"I feel like I'm up to the task," DeSmith said. "A 52-save shutout helps the confidence. I've been working for this moment for a long time to step in there in case something happens to (Jarry)."

Guentzel completed the hat trick with an empty-netter, his 40th goal of the season, as Pittsburgh moved two points ahead of Washington for third place in the Metropolitan Division. The Penguins, Bruins and Capitals have already secured playoff spots but are fighting for seeding in the Eastern Conference. Pittsburgh and Boston are knotted at 99 points apiece.

"I'm taking it game by game now," DeSmith said. "I'm just happy to help the team get a win."

Jason Zucker also scored for the Penguins, who have won three of five following a four-game losing streak. The Penguins lost 2-1 at Boston on Saturday.

Jeremy Swayman made 28 saves for the Bruins, whose two-game winning streak ended. Boston has lost five of eight overall.

"(Pittsburgh) made some plays," Swayman said. "Unfortunately, I couldn't come up with the stop."

DeSmith's shutout was his third of the season and ninth overall. He stopped 41 shots in the final two periods alone.

Jarry is week-to-week with a lower-body injury, meaning Pittsburgh will likely need to rely on DeSmith early in the playoffs.

"He's a special goaltender," Guentzel said. "He's come in all year and he's done the job for us. He kept us in the game and made a lot of key saves."

Guentzel opened the scoring at 7:49 of the first period. He fired a wrist shot between Swayman's pads from the slot off the rush.

Boston outshot Pittsburgh 10-0 through the first six minutes of the second period, but the Penguins extended their lead on their first shot. Jeff Carter made a one-touch redirect pass through the neutral zone to spring Zucker, who beat Swayman to the glove side with a wrist shot. It was his fourth goal in eight games.

Guentzel made it a 3-0 game late in the second. After a Bruins giveaway in their own zone, Kris Letang sent a cross-ice pass to Guentzel, who beat a sprawled Swayman up high. He has seven goals in his last four games.

DeSmith made his second straight start and fourth in five games.

His previous career best was 48 saves on 51 shots during a December 2018 home win over Boston.

DeSmith was sharp in the early portions of the second period with the Bruins swarming and Pittsburgh clinging to a 1-0 lead. He was equally impressive in the third with the Penguins ahead by three goals. The Bruins had a 15-6 advantage in shots and two power plays during the first 10 minutes of the period.

"I was happy with how I tracked the puck through traffic," DeSmith said. "My rebound control was good, too. They get a lot of bodies to the net."

The record for saves in a shutout is 59 by Edmonton's Ben Scrivens on Jan. 29, 2014. Semyon Varlamov and Mike Smith (54 saves each) and Craig Anderson (53) are the others ahead of DeSmith on the list.

Guentzel reached the 40-goal mark for the second time in his career.

He became the eighth player in franchise history to record 40 or more goals in multiple seasons with the team. Only Sidney Crosby and Evgeni Malkin have accomplished the feat since the turn of the century.

"It's a cool number," Guentzel said. "You put a lot of time and effort into this game. To score goals in this league is special. I'm fortunate to play alongside a lot of good players."

Guentzel has 81 points, topping 80 for the first time in his career. Since 2005-06, only Crosby, Malkin and Phil Kessel have reached 80 points with Pittsburgh.

"I just think he's a great player," Penguins coach Mike Sullivan said. "He's one of the best goal scorers in the league and he shows it year-in and year-out."

Goaltender Linus Ullmark (undisclosed) could play in one of the Bruins' two weekend games, Cassidy said, adding that if forward David Pastrnak (upper body) and defenseman Hampus Lindholm (lower body) aren't in the lineup Sunday, they could be back Tuesday.

Pastrnak leads the Bruins with 38 goals. Lindholm, a top-four defenseman, was acquired in a March trade with Anaheim, and Ullmark has 23 wins. Pastrnak missed his eighth straight game while Lindholm sat out his sixth and Ullmark his third.

Boston has scored two goals or fewer in regulation in each of its last seven games and hasn't scored on the power play in nine games, an 0-for-29 stretch.

Penguins: At Detroit on Saturday.