Kraken hold on to beat Avalanche 3-2 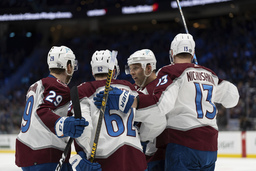 SEATTLE (AP) Kole Lind, Jordan Eberle and Yanni Gourde all scored in the first period and the Seattle Kraken held on to beat the Colorado Avalanche 3-2 Wednesday night.

Philipp Grubauer had 25 saves as Seattle won its third straight. Matty Beniers had an assist to become the first rookie this season to begin his NHL career with a point in each of his first four games.

"We got off to the start that we needed," Kraken coach Dave Hakstol said. "To be able to play with a lead against Colorado is important and we were able to do that. Little pieces of the game, critical times of the game, different guys stepped up and did a good job and that's what collectively leads to a good win."

Cale Makar and Artturi Lehkonen scored for the Avalanche, and Pavel Francouz finished with 26 saves. Colorado, assured of having the top seed in the Western Conference, has lost two straight after winning nine in a row. The Avalanche remained tied with Florida with 116 points for the Presidents' Trophy for the league's best record.

"We weren't working hard enough," Avalanche coach Jared Bednar said. "We weren't ready to play at the start of the game. The Kraken have been playing some good hockey lately and I thought they played hard from start to finish."

Lind gave the Kraken a 1-0 lead on a backhand shot 1:12 into the game for his second goal of the season.

"The first 10 minutes, they scored a quick few goals," Colorado's Nazem Kadri said. "That kind of set us back after that. I think we settled in and controlled the game a little more, but just a slow start.

The Kraken made it 3-0 when Jared McCann's shot from the right point went off the skate of Colorado defenseman Bowen Byram and Gourde in front and in with 5:16 remaining in the opening period. It was Gourde's 18th.

"Honestly, any team you go up on 3-0, it's a bonus," Eberle said. "At the same time, against these guys, you understand they have the firepower to come back from that. I thought we did a good job limiting their chances."

"You have to have a trust through every layer of what you're doing," Hakstol said. "We're seeing a lot of that right now. Guys are doing a good job together. That's simply the players knowing how they want to do it and going out and playing well together."

Seattle selected Beniers out of Michigan with the No. 2 pick in last year's draft. He's the first rookie to debut with an expansion team in its inaugural season and record a point in each of his first four games since Bernie Johnston (1979-80). The longest stretch is six games by Wayne Gretzky (1979-80).

Beniers also had an assist in his NHL debut, a loss at Calgary, last Tuesday. He then scored a goal in back-to-back games against New Jersey and Ottawa.

NOTES: Colorado forward Mikko Rantanen missed Wednesday's game with what the team called a non-COVID-related illness. ... Kadri returned from an upper-body injury, playing for the Avalanche for the first time since March 31. ... With his assist on Gourde's first-period goal, McCann registered his 200th NHL point. ... The Kraken honored linesman Vaughan Rody, who worked his final NHL game in his 21st season. Rody lives in Lake Stevens, Wash.

Avalanche: At Edmonton on Friday night.

Kraken: At Minnesota on Friday night.