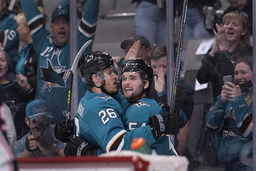 Rudolfs Balcers also scored and Kaapo Kahkonen made 22 saves to help the Sharks snap their longest skid since losing 10 straight in November 2005.

"We feel a little relief, obviously," coach Bob Boughner said. "It didn't come easy, they pushed us hard. But to get two points, especially after a long road trip, coming home and it's a quick turnaround."

Jack Roslovic scored twice for Columbus for his third multi-goal game in the past five contests. Elvis Merzlikins made 25 saves. The Blue Jackets got swept in their three-game California swing, getting outscored 8-1 in the first period of the three losses.

"We can't try to come back every night," Roslovic said. "It's just too difficult to do in this league. It's just about being mentally focused right from the first puck drop. I guess we just didn't have it this road trip."

The game between two teams eliminated from playoff contention and both missing key players to injuries was sloppy at times and and lacked any drama until late in the game.

Reedy got San Jose started early when he got position in front of the net on the power play and knocked in a rebound to give the Sharks the lead.

San Jose added on when rookie Thomas Bordeleau set up Balcers with a spin-o-rama pass from in back of the net.

Columbus had an apparent goal late in the period by Adam Boqvist wiped out by a successful challenge for offside by the Sharks. That has been a recurring problem this season for the Blue Jackets, leaving coach Brad Larsen frustrated that Boqvist entered the zone early.

"It's insanity," Larsen said. "It's a lazy play. It's just not focused. We've had a few. Some of them are different. This is a no-brainer. Just drag your foot, straddle the line. We have two or three different options here."

Reedy then made it 3-0 when he batted a rebound of Sasha Chmelevski's shot out of midair and past Merzlikins.

"I thought we had a good start," captain Logan Couture said. "Good in the first 10 and then we kind of had a bit of a letdown, but we found a way."

The Blue Jackets finally broke through early in the third when Roslovic scored on a rush late in a power play. Roslovic added his second with 6:27 to play, but Columbus couldn't get the equalizer.

The Sharks were without forward Alexander Barabanov, who missed his third straight game with an undisclosed injury. Defensemen Erik Karlsson and Radim Simek remain day to day after getting hurt on a recent road trip for San Jose.

The game featured three players who were college teammates at Michigan less than two weeks ago at the Frozen Four.

Forward Kent Johnson and defenseman Nick Blankenburg played their fourth games for Columbus since signing deals after the college season, while Bordeleau played his second game for San Jose.

Bordeleau got his second assist in as many games, while Johnson got his first career point with an assist on Roslovic's goal.