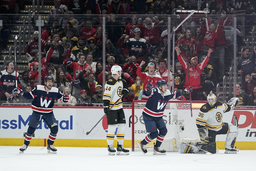 WASHINGTON (AP) Lars Eller got comfortable back at center, and the Washington Capitals seem to have found a groove after a bump in the road.

Returning to his natural position after two games on the wing, Eller scored the go-ahead goal and assisted on another Sunday to help the Capitals beat the Boston Bruins 4-2 and extend their winning streak to three.

Eller was only back at center because Nicklas Backstrom was scratched for what the team called "body maintenance," and he made the most of it by putting Washington ahead with 12:42 left and setting up Tom Wilson's 23rd goal of the season.

"It felt very satisfying, of course, netting a couple of big goals with Tom and (linemate Anthony Mantha)," Eller said. "We had a good game going, feeling good on the puck and really happy with how we played."

With Eller as an important part of the rotation, Washington's penalty kill was a perfect 4 of 4 against Boston's power play.

"The guys were buzzing," said goaltender Vitek Vanecek, who had to make only three of his 30 saves short-handed. "They were blocking shots. Boston tried some passes, and we broke them up, so that was huge. That's what we need at this time."

The Capitals are also getting more than what they need from Wilson, who has four goals in six games and reached 50 points in a season for the first time in his career. John Carlson also scored his third goal in as many games and Alex Ovechkin sealed it with an empty-netter.

Ovechkin's goal was his 45th of the season and 775th of his NHL career. His ninth empty-net goal tied Pavel Bure's single-season record.

After beating the Pittsburgh Penguins on Saturday, the Capitals are inching closer to their biggest rivals and could soon pass them for third in the Metropolitan Division - which would mean avoiding the Eastern Conference-leading Florida Panthers in the first round. Washington's three-game streak followed back-to-back deflating losses at home.

"We don't have any room to lay off the gas," Carlson said. "We're in a tight race. We know that if we played like we were (playing) down the stretch here, our season's going to be really short."

Boston, which is also jockeying for playoff positioning in the East, lost defenseman Matt Grzelcyk to an upper-body injury in the first period. He attempted to hit Washington's Garnet Hathaway about eight minutes into the game and appeared to injure his left arm or shoulder.

The banged-up Bruins were already playing without top right winger David Pastrnak and trade deadline acquisition Hampus Lindholm because of injuries. They got goals from Curtis Lazar and Erik Haula and a handful of highlight-reel saves from Linus Ullmark among his 27, but the continuation of power-play woes meant the end of their two-game winning streak.

Boston finished its four-game road trip 0 of 16 on the power play.

"We've had some issues where there's stuff we'll continue to try to coach into our group," Cassidy said. "But at some point, the execution will turn because they're good players and they have produced on the power play."

NOTES: Conor Sheary returned to Washington's lineup after a one-game absence because of illness. ... Josh Brown replaced Connor Clifton on defense for Boston. ... The Capitals held a moment of silence for former Washington quarterback Dwayne Haskins, who was killed Saturday in an auto accident.

Bruins: Open a three-game homestand Tuesday night against the St. Louis Blues in a rematch of the 2019 Stanley Cup Final.