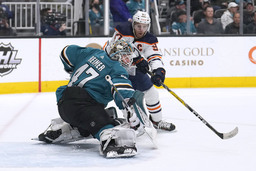 Ryan Nugent-Hopkins tied it with a short-handed goal with 8:04 remaining in regulation before McDavid won it thanks to an assist from a unusual playmaker.

Smith stopped Brent Burns on a rush early in overtime and immediately played the puck ahead to a racing McDavid, who corralled it just past center ice and beat James Reimer for the winner. The goal extended McDavid's points streak to 14 games, giving him 12 goals and 15 assists during the run.

"Our goalie makes maybe the play of the year there with that save and having the presence of mind to throw it up there," McDavid said. "Smitty plays the puck unbelievably well. He was so good all night. For that to happen, it was pretty special to be a part of that play."

The victory moved the Oilers into second place in the Pacific Division with a one-point lead over Los Angeles, although the Kings have a game in hand. Edmonton is five points ahead of fourth-place Vegas in the division.

Smith made 31 saves to keep the Oilers in the game in regulation before helping to win it in overtime.

"It feels like we kind of maybe stole two here, but it doesn't matter how you do it at this time of year," McDavid said.

Tomas Hertl scored a power-play goal in the first period but the Sharks were unable to hold onto the lead and lost their fourth straight. Reimer made 22 saves.

"We did everything we needed to do five on five," coach Bob Boughner said. "That was one of our best, most solid games in a long time. A little bit of the story of our year. Outchanced a team, had so many chances. Smith played great and you can't get that second goal that you need."

San Jose had a chance to add onto the lead with the power play midway through the third period. But the top unit failed to generate and then the second unit let the Oilers tie it when Nugent-Hopkins finished after pretty passes from Darnell Nurse and Zach Hyman set him up at the side of the net.

"I thought our team showed a little bit of resiliency," coach Jay Woodcroft said. "I didn't think it was our smoothest game or cleanest game. But down by one heading into the third period, finding a way to win in overtime in dramatic fashion. It's a credit to our sticktoitiveness and the hard work of all those players in that dressing room."

San Jose capitalized on a power play in the first period when Brent Burns set up Hertl for a one-timer from the circle. Hertl beat Smith for his 27th goal of the season.

The Oilers played without 50-goal scorer Leon Draisaitl, who sat out a day after he missed practice for what was called a "maintenance day." Draisaitl took part in an optional skate Tuesday morning but wasn't able to play in the game.

Draisaitl reached the 50-goal mark for the second time in his career on Sunday in Anaheim. He has a 12-game points streak with 12 goals and 10 assists in that span. His absence ends his streak of 354 consecutive outings that started on Oct. 24, 2017.

The Sharks played four rookies - forwards Jonah Gadjovich, Scott Reedy and Sasha Chmelevski, and defenseman Ryan Merkley - to give them 373 games played by rookies this season. That surpassed the 1992-93 and 2005-06 seasons for the second most in franchise history to the 491 games played by rookies in the 1991-92 expansion season.

Sharks forward John Leonard left the game early in the second period after blocking a shot with his foot and didn't return.