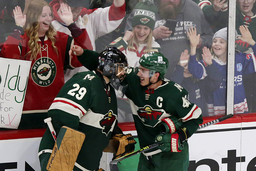 ST. PAUL, Minn. (AP) Jared Spurgeon scored on a give-and-go 1:24 into overtime and the Minnesota Wild recovered to beat the Columbus Blue Jackets 3-2 and provide Marc-Andre Fleury with a victory in his Minnesota debut Saturday night.

Fleury, the three-time Stanley Cup winner who has the fourth-most playoff wins in NHL history, stopped 23 shots for Minnesota, which won its fifth straight game.

After Spurgeon's goal, half of the Wild players went to celebrate with him, while half met Fleury at center ice.

"He's always smiling," Spurgeon said of Fleury. "He has a great attitude. And, obviously, he's been through it all. Just a new team and to come in and play a big game like that is awesome."

Kirill Kaprizov scored twice, including a tying goal with 1:03 left in the third period to put the game into overtime. The Wild are three points ahead of St. Louis for second in the Central Division after the Blues lost at home to Carolina.

Jake Bean and Jakub Voracek scored for Columbus, and Elvis Merzlikins made 35 saves.

The Blue Jackets got in early Saturday morning after an overtime loss in Winnipeg a night earlier and held up against a physical team in Minnesota in a game that turned testy at times.

"We certainly weren't intimated, I know that." Columbus coach Brad Larsen said. "Our guys played hard. I got no problem with how we played."

Fleury's debut, following a trade-deadline deal that sent a conditional 2022 first-round draft pick to Chicago, was a bit delayed as he sat the past two games while Cam Talbot posted a pair of wins.

"Still a bit nervous to do well in the first game here, so I was glad to get some shots finally, at some point," Fleury said.

Kaprizov put the Wild ahead with a power-play goal midway through the first. Mats Zuccarello sent a pass from behind the net to the opposite side where Kaprizov was able to sneak a quick shot past Merzlikins from a tough angle.

Kaprizov has 12 goals and six assists in his last 14 games. He passed Brian Rolston for the second-most points in a single season in team history with 80. Only Marian Gaborik had more with 83 in 2007-08.

"There's something special there," Wild coach Dean Evason said. "The knack to step up. We've seen it through history that great players do that. They don't score necessarily in the 7-1 hockey games. They score in all situations but most importantly in these tight type of games and step up and find a way. He's a special player."

Bean and Voracek turned the game in Columbus' favor in the second. Bean was credited with his fifth goal of the season and first in 25 games after a scrum in front of Fleury. Fleury sprawled out to try and make the save but appeared to kick the puck in with the back of his skate.

Voracek scored his fifth of the season with 1:05 left in the period with a big shot from right in front of Fleury.

"They didn't bully us around," Bean said. "They were flying around, but we stepped up as well. We might not have those big guys like they do but when we work as a group of five, we can get some stuff done too. It's good to have that belief in the room when you get in situations that you need it."

After being announced as the third star of the game, Fleury took a lap around the ice when a fan tossed a bouquet of flowers on the ice. Fleury, whose nickname is Flower, turned and scooped up the flowers before heading back to the dressing room.

Fleury said he can't remember having flowers thrown at him.

Blue Jackets defenseman Zach Werenski left the game in the first period with an upper-body injury and didn't return. Werenski, who has 10 goals and 32 assists this season, took a big hit from Minnesota defenseman Jacob Middleton.

"It takes our best player out of the game," Columbus center Sean Kuraly said. "It's not something you want. We thought it was high. They didn't call it. Not a penalty. You move on and keep playing."

Wild: Talbot will be back in net as Minnesota hosts division-leading Colorado on Sunday.