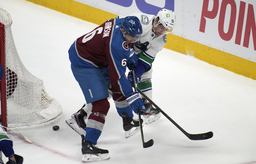 Boeser got things rolling by taking advantage of a turnover with a goal 1:23 into the final period. Miller knocked in another off a rebound moments later. Bo Horvat added an empty-net goal as the Canucks finished 1-2 against the Avalanche this season.

"It's the best game I've been a part of with this team," Vancouver coach Bruce Boudreau said. "We used the word `committed' before the game and every one of them was committed. To play that team on even terms is a pretty special moment."

The Avalanche have been the third-period comeback kings this season, but couldn't add to their total of 10. Nazem Kadri's power-play goal made it 2-1 early in the third.

Halak came up big down the stretch to earn his first win since Jan. 31.

"We're in a playoff push and we need to be playing playoff hockey from now on if we want to make it," Halak said.

Darcy Kuemper made 24 saves in a game filled with plenty of skating and not a lot of whistles. There were long stretches with no breaks.

"It looked like we didn't have the jump we had in the past," said Avalanche coach Jared Bednar, whose team had its four-game win streak halted.

"Besides that lapse, I think the game was pretty solid for us," Kadri said. "They're an opportunistic team."

Miller added an assist on Horvat's empty-netter with 17.6 seconds remaining. Miller now has 31 points (10 goals, 21 assists) over his last 17 games.

"It seems like the harder the challenge, the better we play sometimes," Miller said. "There's no doubt that wins like that are very contagious and we feel great about it."

The Canucks face an uphill climb to claim one of the final playoff spots. Just don't tell them that.

"Until we're done, we're playing every game as if it's our last game," Boudreau said after the morning skate. "Don't necessarily look at the standings, just play it. Eventually, if you have some success, you'll be where you want to be."

Andrew Cogliano made his Avalanche debut after being acquired from San Jose at the trade deadline. The veteran forward nearly scored an early goal and demonstrated his tenacity by getting into a minor scuffle after being called for tripping.

The defense ruled the night over the opening 40 minutes. Kuemper withstood 18 shots through two periods, while Halak turned back 23 - and got some help with Kadri hitting the post.

The Avalanche have a big lead in the standings, but no plans of cruising toward the finish line. It's full throttle all the way with three straight second-round playoff exits as motivation.

"You're always a good team until someone shows you you're not," Bednar said.

Colorado forward Artturi Lehkonen will have to wait to make his Avalanche debut as he works through immigration issues. Lehkonen was acquired from Montreal at the trade deadline. ... Singer Hazel Miller initially struggled with the start of "O Canada," apologized to the crowd and then began again. She followed with a resounding version of "The Star-Spangled Banner" that received a loud applause.

Kadri doesn't fully understand why he's getting asked by the officials to leave the faceoff circle.

"I feel like I'm not really doing much different than anyone else is," Kadri said. "I want to be the guy taking them. Doesn't help when I'm getting kicked out three or four times a night.

"There's communication for sure," Kadri added. "Agree to disagree kind of thing."

Cogliano hopes to soon be joined in Denver by his wife and two young kids. The couple's 1-year-old daughter, Olive, is dealing with complications related to asthma that's led to a few trips to the hospital this season.

"We're on the right path to figuring it out," he said.

Canucks: At Minnesota on Thursday.