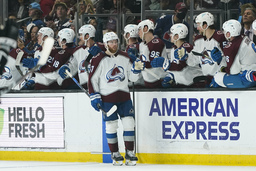 Mikko Rantanen had a goal and an assist, and the Avalanche continued their push for a second straight Presidents' Trophy by becoming the first team this season to pass the 90-point mark.

Kuemper followed up his 46-save showing in a 3-0 win over Calgary on Sunday by getting his fifth shutout of the season. It was the second time in two months he recorded consecutive shutouts after doing it against Dallas on Feb. 13 and Vegas on Feb. 16.

"He's playing with a ton of confidence, and it's pouring over to the rest of our team," Colorado coach Jared Bednar said.

Jonathan Quick allowed three goals on 27 shots for the Kings, who are 1-2-1 in their past four games.

"We've got to pick it up a little bit," defenseman Olli Maatta said. "I know we're missing a lot of guys, but everybody who comes in, we know how good they are and what they can do. We've just got to find a way."

Colorado's dangerous special teams cashed in on each of its first two power plays, with Nichushkin racing through the slot to put in Rantanen's centering pass at 6:36 of the first period.

Compher put Colorado ahead 2-0 with 29 seconds left in the second by redirecting Cale Makar's shot long. Makar was instrumental in the sequence by racing down to break up Anze Kopitar's short-handed breakaway and forcing his shot wide before the Avalanche got their league-leading 51st goal with the man advantage.

Despite being known for the ability to put the puck in the net, especially on the power play, Colorado looked just as adept in limiting a fast Los Angeles team that's thrived in accumulating chances to its second-fewest shots this season.

"I think we didn't really give them anything off the rush, and once we got into the zone we were closing quick, taking away their time and space. And when they were getting shots, they were to the outside and I was able to see them, and the guys did a amazing job in front of me," Kuemper said.

Defenseman Josh Manson made his Avalanche debut after being acquired from Anaheim in a trade Monday. Manson quickly settled in after eight seasons with the Ducks, finishing with a plus-1 rating, one shot and 10 hits in 18:13 as he hopes to add some grit to a group known for its offensive skill.

"I think they have so much talent here that really all I need to do is just come in and fly under the radar and help keep pushing the team in the right direction," Manson said before the game. "Doing the little things that I do that a lot of times just go unnoticed, and I think that's kind of the best way to describe it is if I'm not being noticed, then it's probably a good thing."

Colorado made another trade Tuesday, picking up bottom-six forward Nico Sturm from Minnesota in exchange for Tyson Jost. Sturm has nine goals and eight assists in 53 games this season, and his contract frees up some salary-cap space compared to Jost's if the Avalanche decide to make another acquisition before the trade deadline.

Kings defenseman Tobias Bjornfot did not play after sustaining a lower-body injury against Florida on Sunday and is day-to-day. Bjornfot's absence meant Los Angeles did not have any of its six defensemen that played on opening night in the lineup against the Avalanche.

"As they keep falling out, it gets tougher," Kings coach Todd McLellan said. "You get deeper in the batting order and guys end up playing significantly more minutes against opponents that they normally wouldn't play against, and that catches up to you."

There could be at least one reinforcement on the way as Alex Edler took contact in practice Tuesday for the first time since breaking his ankle on Dec. 11 and is on track to return by the end of the month.

Bednar said forward Gabriel Landeskog has already had one rehabilitation session after undergoing knee surgery, and Colorado's leading scorer with 30 goals believes he'll be ready for the playoffs.

"We're waiting for our doctors to catch up with the doctor who did the surgery and give us a firm timeline or a projected timeline of when he'll be back, but Gabe feels good about it," Bednar said.