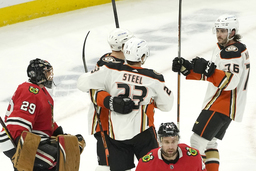 CHICAGO (AP) Patrick Kane wants to keep playing with Dylan Strome. Skating on a line with the young center and Alex DeBrincat, he is making quite an argument for Strome at the moment.

Kane had a goal and five primary assists for a career-high six points, and the Chicago Blackhawks beat the banged-up Anaheim Ducks 8-3 on Tuesday night.

Strome had three goals and an assist, and DeBrincat finished with a goal and three assists. Jonathan Toews, Brandon Hagel and Ryan Carpenter also scored as the Blackhawks turned a fast start into their third win in nine games.

Strome, who turned 25 on Monday, could be on the move ahead of the NHL trade deadline on March 21. But he has 12 goals and 11 assists in his last 23 games, and his obvious chemistry with Kane and DeBrincat could lead new general manager Kyle Davidson to hold onto him for now.

"He's been fun to play with," Kane said. "I mean, like I said, he has the ability to make plays when he gets the puck. I think one thing that's really noticeable lately is his ability to drive the net and create even more space for himself or his linemates."

Kane is up to 10 goals and 18 assists in his last 16 games, and DeBrincat has scored in four straight games.

"Playing with some good players," Strome said. "So whenever you're on the ice with those guys, you've got to be ready."

Anaheim opened a five-game trip with its sixth consecutive loss to Chicago. The Blackhawks also beat the Ducks 3-0 on Jan. 15, and the teams play again March 23 in California.

Trevor Zegras scored a power-play goal for Anaheim, which was coming off a 3-3 homestand. Jakob Silfverberg and Adam Henrique also scored, and Sam Steel had two assists.

John Gibson played just one period in his return from an upper-body injury that sidelined the All-Star goalie for Sunday night's 3-2 overtime win over San Jose. He made eight saves on 13 shots before he was replaced by Anthony Stolarz, who finished with 16 stops.

The Blackhawks jumped all over the Ducks, scoring five times in the first period for the first time since Feb. 18, 2019, against Ottawa.

"For whatever reason, we chose not to manage the puck, and we chose to give (Kane) lots of room," Anaheim coach Dallas Eakins said. "That led to a disastrous first period."

Kane set up Strome and DeBrincat before scoring on his own at 13:53. Kane then found Carpenter in front on a delayed penalty, and Toews finished a 2-on-1 with Hagel for a short-handed goal with 28 seconds left in the period.

The Blackhawks got right back to work in the second. Hagel drove to the net and slid home a backhand for his 18th of the season, making it 6-0 just 19 seconds into the period.

Anaheim got on the board when Silfverberg scored in front at 4:31, and Zegras added his 16th of the season before Henrique redirected Cam Fowler's point shot past Marc-Andre Fleury at 7:57.

But the Blackhawks turned away the Ducks' rally when Kane made a slick backhand pass to a streaking Strome for his 14th goal with 5:10 left in the second. Strome completed his hat trick with 2:44 left, with Kane and DeBrincat each picking up another assist.

Anaheim claimed Andrej Sustr off waivers from Tampa Bay. The 6-foot-7 defenseman had one goal in 15 games for the Lightning this year. He appeared in five games with the Ducks during the 2018-19 season.

Ducks: At Nashville on Thursday night.

Blackhawks: At Boston on Thursday night.