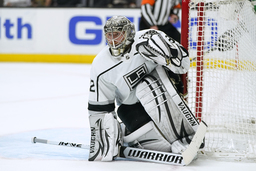 ANAHEIM, Calif. (AP) In his 12 years as a player and nearly 15 as an NHL coach, Trent Yawney had not encountered a situation where the head coach was unable to be behind the bench with one hour to go before faceoff.

Yawney can cross that off his list now. The Los Angeles Kings assistant found himself running things after Todd McLellan entered COVID-19 protocols just before the game against Anaheim.

The Kings seemed not to be rattled, as they dominated both ends of the ice in a 4-1 victory over the Ducks on Friday night and gave Jonathan Quick the distinction of becoming the fourth American-born goalie to reach 350 victories in the NHL.

Quick stopped 24 shots and improved to 25-13-9 against the Kings. He is the 24th goalie overall in league history to reach the 350-victory milestone. Ryan Miller tops U.S.-born goalies with 391 victories, followed by John Vanbiesbrouck (374) and Tom Barrasso (369).

"I thought he was great. Sometimes he doesn't get enough credit for his leadership qualities, because of his position, but he was there in terms of providing that," Yawney said. "You saw that in the second period with a little bit of a scrum he was in. But he's fiery and gave us a chance with some huge saves."

The Kings extended their winning streak to four and moved into second place in the Pacific Division, with help from two goals and an assist from Adrian Kempe. It was Kempe's fifth multigoal game of the season - three times in the last four games - and he has seven goals in six February games.

Carl Grundstrom also scored and Anze Kopitar had a goal and an assist for the Kings, who evened this season's Freeway Faceoff series at one game apiece.

"As I said to the guys, they probably didn't need anybody behind the bench tonight, in terms of the the magnitude of the game at this time of the season and the rivalry," Yawney said. "They played very, very well. It was nice to see them show some success."

Yawney said McLellan told the trainer he wasn't feeling well when they got to the arena and tested positive, saying McLellan "didn't want to put the rest of the group at risk."

"It feels good. It's a little crazy how Todd went down but Trent and (assistant coach) Marco (Sturm) have done a good job preparing us," Kopitar said.

Troy Terry scored early in the third period for Anaheim, which has lost four of its last six. John Gibson allowed four goals on 20 shots before being pulled midway through the second period. Anthony Stolarz made 12 saves in relief.

Gibson - one of two Anaheim players who were selected for the All-Star game - is 1-4 with a 5.72 goals-against average since the All-Star break.

"I think he's been greatly fatigued coming out (of the All-Star break)," Ducks coach Dallas Eakins said. "We didn't play very well in front of him. He was in the net for three games in four nights. We came out of it, tried to get him some rest and get Stolarz in there, and I'm just not sure we're there yet. Hopefully we'll be there soon."

Both of Kempe's goals came in the second period, when the Kings scored three times in a nine-minute span to put the game out of reach. The Swedish left wing made it 2-0 at 3:51 of the second period on a slap shot from the left circle.

After Kopitar's power-play goal broke his six-game drought and extended Los Angeles' lead to three goals at 10:11, Kempe beat Gibson with a snap shot into the far side of the net at 12:51 for his 25th.

Terry averted a shutout at 2:12 of the third on a snap shot from the slot for his 27th of the season.

Grundstrom, who was a healthy scratch for the past eight games, made a quick impact with his seventh goal of the season at 7:50 of the first period. Five of Grundstrom's 18 career goals have come against the Ducks.

Byfield stopped on a dime on a rush up the right side near the boards and delivered a perfect pass to Grundstrom, who beat Anaheim defenseman Simon Benoit to the slot and redirected it into the net.

Ducks: Host the Islanders on Sunday.