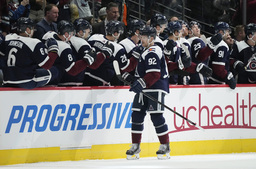 DENVER (AP) Gabriel Landeskog was a captain of few words in the dressing room, not needing to say much after Colorado's forgettable first period on Friday night.

His scoring showed the way.

Landeskog scored three times, Nathan MacKinnon added two more and the Avalanche stormed back from a three-goal deficit to beat the Winnipeg Jets 6-3.

It was Landeskog's second hat trick this season against the Jets, and he was mobbed by teammates along the boards after his third goal gave Colorado a comfortable 6-3 advantage. The Avalanche scored six straight goals after falling behind 3-0 following a sluggish opening period.

"The difference I see in him in growing over the years is the bigger the game and knowing we need to get something going like a night like tonight ... he takes a lot of that weight and puts it on his shoulders," Avalanche coach Jared Bednar said. "He's showing up at the right times."

Even with the offense flowing smoothly of late, Bednar took the opportunity to change up the line combinations, all part of an eye toward the playoffs. He wants his players comfortable - no matter the lineup.

It took a period, but they quickly got in a rhythm.

Andre Burakovsky, playing on the same line as MacKinnon and Mikko Rantanen, broke out of his goal slump. He gave the Avalanche the lead for good with a liner through the pads of Connor Hellebuyck 56 seconds into the final period.

It was Burakovsky's first goal since Jan. 14. For that, he credited his new haircut.

"Time for a change and it worked out," Burakovsky joked.

Landeskog didn't take long to settle in on a line that included Valeri Nichushkin and Nazem Kadri. He scored twice down low in the second period, pushing the puck past Hellebuyck to get the Avs started and then tied it up at 3 apiece when he tipped it past the Jets goaltender. In between, MacKinnon scored in his return after missing a game due to a lower-body ailment.

Kyle Connor, Evgeny Svechnikov and Adam Lowry scored for the Jets, who fell to 0-2-1 on their four-game trip. They were cruising along after Lowry's short-handed goal made it 3-0 with 3:34 remaining in the first period.

About that time, Avalanche defenseman Cale Makar drifted over and gave goaltender Pavel Francouz a reassuring tap on the pads. It seemed to do that trick as Francouz stopped 16 shots after that.

With Colorado up big, things turned chippy. Pierre-Luc Dubois was sent off with a late misconduct penalty and Josh Morrissey drew a slash call for coming down on MacKinnon's wrist.

"We played well in the first period. We brought the game to them," said Dubois, who had two assists. "In the second and third, we kind of go back to what has been making us unsuccessful, playing slow. It's not bringing it to the other team. It's just waiting for them to make a mistake.

"I think you fight fire with fire. The more you just sit back against a team like this with players like that, the more they're going to find stuff."

Connor got the Jets started early with a goal 2:13 into the game. He continues to make himself right at home away from home, with at least a point in 22 of his 28 road contests this season.

Colorado defenseman Bowen Byram (personal) skated before the team's morning session Friday. Byram hasn't played since Jan. 10, and there remains no timetable for his return.

Avalanche analyst Peter McNab announced an update on his health through AltitudeTV's social media: "Yesterday I received news from my doctor that my cancer is in remission. You can only imagine my emotions yesterday and today, but as exciting as this is, the overwhelming emotion I have is gratitude."

Rantanen had three assists, while Devon Toews, Makar, Nichushkin and Kadri each had two assists. .... Colorado beat Winnipeg 7-1 in Denver on Jan. 6.

Avalanche: At Vegas on Saturday. The Avalanche are 5-0-1 in the second game of a back-to-back this season.