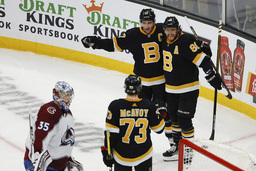 BOSTON (AP) David Pastrnak's scoring slump is a thing of the past.

A game after ending a four-game scoreless drought, the Bruins' top scorer had two goals to help the Boston Bruins roll past the Western Conference-leading Colorado Avalanche 5-1 on Monday.

"I think that was the best game of this year if you're talking full game, 60 minutes," Pastrnak said. "We just stayed in the moment. We were really energized. It was a great win for us and two big points."

It was a makeup for their Dec. 23 matchup that was postponed because of a league-wide outbreak of COVID-19 cases.

Pastrnak, who broke out of a four-game scoring slump with a game-winning overtime goal to lift Boston past Ottawa on Saturday, now has a team-leading 27 goals on the season.

Coach Bruce Cassidy said Hall in particular has stepped up since Brad Marchand was suspended Feb. 9, taking his place on Boston's top line. Hall has five points over the past three games.

"Especially the play-making part," Cassidy said. "He's made a lot of nice plays with those extra minutes."

Nathan MacKinnon had the lone goal for Colorado, which had its two-game win streak snapped. Darcy Kuemper finished with 40 saves.

"I just thought they were the quicker, more determined team," Avalanche coach Jared Bednar said. "It wasn't our most competitive effort."

Gabriel Landeskog said a stretch that's had the Avs play four games in six days wasn't an excuse for their lethargic start.

"Sometimes you have bad games or tough games," he said. "I'm not gonna blow this out of proportion. We can play better and be better," he said. "We'll bounce back on track."

Boston held a 21-9 edge in shots on goal during the opening period, but needed a little luck to take an early 1-0 lead.

Charlie McAvoy took away the puck from Avs star defenseman Cale Makar along the boards in the Colorado zone and flipped it toward the slot. The pass went between Bergeron and Samuel Girard and ricocheted to a cutting Pastrnak, who ripped his snap shot past Kuemper with 2:30 remaining in the period.

The Bruins pushed it to 2-0 with 11:59 left in the second after Bergeron gathered a pass from Hall, had his initial shot saved by Kuemper, then stretched his stick to flip in his own rebound. It was Bergeron's 13th goal of the season.

Colorado finally got on the board via the power play. The Avalanche took advantage and MacKinnon got his slap shot into the roof of the net past Swayman off assists from Mikko Rantannen and Makar.

But the Bruins responded quickly, scoring two goals over the next 2:44.

First, Pastrnak fired in a slap shot from the top of the slot through traffic to make it 3-1.

Just over a minute later, DeBrusk was the trailer following a Bruins takeaway and was the recipient of a pass from Curtis Lazar in front of the net. DeBrusk's first wrist shot was stopped, but he wrapped the rebound past Kuemper for his second goal in two games.

NOTES: Pastrnak has scored 19 of his goals in the past 22 games. . Monday was the Bruins' final game before Marchand is eligible to return from his six-game suspension for punching and high-sticking Pittsburgh's Tristan Jarry.

Boston visits Seattle on Thursday in the first of six straight on the road.