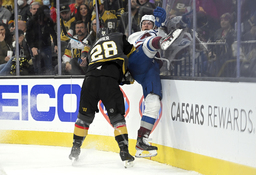 Playing the second game of a back-to-back, the Avalanche bounced back from Tuesday's 4-1 home loss to the Dallas Stars and improved to 23-2-2 since Dec. 6, the best record in the league over that span.

"As that streak started to grow, I think our guys were digging in," Colorado coach Jared Bednar said. "There's a hunger and a commitment to our group right now and it's a good hockey team, we're a deep hockey team and we're getting different contributions from different guys every night and different aspects of our game."

Mikko Rantanen added an insurance goal late in the third for the Avalanche, beating Vegas goalie Laurent Brossoit, who made 23 saves.

Landeskog broke the ice just 41 seconds into the third period, taking Cale Makar's cross-ice pass and firing the puck over Brossoit's right shoulder and just under the crossbar.

Colorado's victory spoiled the long-awaited debut of Jack Eichel, who was in action for the first time since being acquired from Buffalo and becoming the first NHL player to play after having artificial disk replacement surgery on his neck in November.

Eichel, acquired by Vegas in a trade with Buffalo for a package including forwards Alex Tuch and Peyton Krebs on Nov. 4, had surgery Nov. 12, began practicing with the Golden Knights on Jan. 11, and was cleared for full contact Feb. 7.

The 25-year-old finished with one shot on goal and one hit in 17:24 of playing time.

"I was having a pretty fun time out there," said Eichel, who also had two penalties in his Vegas debut. "I think there's some stuff to build on, but it's a process. I know it's going to get better. I didn't expect it to be perfect tonight."

Eichel joined Max Pacioretty and Evgenii Dadonov on the first line, as captain Mark Stone was sidelined with a back injury that is expected to keep him out for a couple of months.

With Vegas fans already fired up about Eichel at puck drop, it didn't take long it ignite the announced gathering of 18,209 into an uproar when Colorado's Nathan MacKinnon dropped Vegas' Nolan Patrick with a shoulder to the face. The hit sent MacKinnon to the box for interference and Patrick to the locker room for the night, forcing Vegas to double-shift players on the fourth line.

The teams traded several good scoring chances throughout the first, including Vegas' Chandler Stephenson, who had a short-handed breakaway opportunity thwarted by Kuemper, and Rantanen, who had a pair of one-timers stopped by Brossoit.

Brossoit and Kuemper continued to shine as the best players for their teams after another stellar showing in the second period, each making huge saves to keep the game scoreless through two.

"It was a tight-checking game, I felt good," Kuemper said. "I think a lot of that was the guys in front of me were really committed to defensive hockey. It was 0-0 game going into the third, it looked like it might be a one-goal game. So guys did a great job of boxing out, letting me see it and staying on the D-side of pucks. When they allow me to see it makes my job a lot easier."

Vegas' Evgenii Dadonov and Reilly Smith each had chances in the third period, breaking in alone. But Kuemper stuffed Dadonov at the doorstep and Smith's shot caromed off the post.

"I thought he was solid, start to finish," Bednar said of Kuemper. "Made some big saves for us, was fighting to make sure he could see the puck. Looked square and calm and relaxed in the net tonight. Stayed upright, big goalie, you gotta make the perfect shot to beat him right now."

NOTES: Vegas' last three games have ended in a shutout, one victory and two straight losses. ... Landeskog's goal ended Brossiot's shutout streak at 100:41, dating to Vegas' 4-0 shutout in Edmonton on Feb. 8. ... During their run since Dec. 6, the Avalanche boast a league third-best 3.93 goals-for per game, and have allowed the second-fewest goals per game, at 2.33. ... The Avalanche are 17-1-2 since the turn of the calendar.