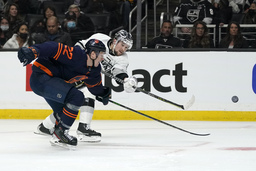 LOS ANGELES (AP) Kailer Yamamoto scored the tiebreaking goal with 4:46 left and the Edmonton Oilers remained undefeated under new coach Jay Woodcroft with a 5-2 win over the Los Angeles Kings on Tuesday night.

Connor McDavid and Ryan Nugent-Hopkins each had a goal for the Oilers, who are 3-0-0 since Woodcroft replaced Dave Tippett last Thursday. Zach Hyman and Evander Kane added empty-net goals, and Mike Smith made 30 saves.

"We've asked everybody to up the work rate," Woodcroft said. "We're asking the team to play a certain style, a demanding style, and very happy that the team is seeing results."

Yamamoto was at the front of the crease to capitalize after Leon Draisaitl took the puck from Matt Roy following Petersen's indecision, continuing the Oilers' recent turnaround. They moved one point ahead of the Kings for third place in the Pacific Division.

Danault scored with 8:18 left in the third period to tie it 2-all, finishing off Viktor Arvidsson's centering pass from behind the net and canceling out Nugent-Hopkins' seventh goal at 7:44 that gave Edmonton its first lead.

"We had some good practices, and I thought we were prepared, but we just didn't have all our stuff tonight. We didn't have everybody," Kings defenseman Drew Doughty said.

McDavid tied it 1-all late in the second on his 25th goal. There was a lengthy conversation among the officials on the ice about whether it should count before determining the reason Jesse Puljujarvi made contact with Petersen was because Kings D Mikey Anderson pushed him into the goalie, and Woodcourt loved the grit McDavid's line showed there.

"Started with a great neutral zone forecheck," Woodcroft said. "We picked one off, Puljujarvi picks one off, we go right back down the Kings' throat. I loved the skill play to knock the puck down, and then to see the bodies around the blue paint and score a May-type goal when we're down 1-0 at the end of the second period."

The Kings held a pregame ceremony recognizing Doughty playing in his 1,000th career game on Jan. 27 against the Islanders. It produced two humorous moments, the first coming when Doughty thanked Oilers players and coaches for being on the bench during the festivities and acknowledging how awkward it was for them. The second came when a celebratory video message from Trevor Lewis, the Calgary Flames forward and longtime teammate of Doughty's, was briefly interrupted by Doughty's nemesis, Matthew Tkachuk.

NOTES: McDavid has two goals and four assists during a four-game point streak. He scored for the second straight game. . The Oilers dressed 11 forwards and seven defensemen for the second consecutive game. They also used the alignment in a 3-0 win at San Jose on Monday. . Kane received a roughing penalty for punching Kings forward and noted agitator Brendan Lemieux late in the second period.

Kings: At the Vegas Golden Knights on Friday night.