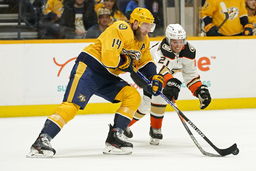 NASHVILLE, Tenn. (AP) Yakov Trenin scored the tiebreaking goal in the third period and had an assist, Ryan Johansen added a goal and an assist, and the Nashville Predators beat the Anaheim Ducks 3-2 on Monday night.

"I thought we were ready to play," Nashville coach John Hynes said. "Our puck execution wasn't great in the first period. It caused us turnovers and caused us to have to defend too much.

"We addressed it and I thought we got better as the game went on. I liked our compete and I liked our toughness. It was a good win. It was a hard-fought battle."

"He has some offensive skills," Hynes said. "You can see how abrasive he can be and how he uses his size and toughness. But he can score goals and make plays when they need to be made."

Rickard Rakell and Jamie Drysdale scored for the Ducks.

Trenin fired a wrist shot over the shoulder of goaltender John Gibson as he skated through the slot on a 2-on-1 rush at 12:10 of the third.

Johansen scored the first goal of the game on a 3-on-2 break with 7:26 remaining in the first period. His wrist shot from the lower edge of the right circle went over the shoulder of Gibson into the far side of the net.

Rakell tied it at 5:47 of the second on a wrist shot from the slot along the edge of the right faceoff circle to beat Saros high to his glove side.

Granlund scored a power-play goal at 15:20 of the second with a wrister from the slot over the right shoulder of Gibson for a 2-1 Nashville lead.

Drysdale's shot from the point bounced off Nashville defenders Roman Josi and Dante Fabbro and past Saros into the net 3:47 into the third period to tie it 2-all.

"We are a mentally tough group," Hynes said. "The nice thing is we have a clear identity and our players know what that identity is.

"When they saw what happened on that goal they said, `We have to get back to work.' I liked the way our bench and the players on the ice reacted, especially the first shift after the goal."

Tanner Jeannot's assist on Johansen's goal earned him his fourth point in his last six games. Trenin also assisted on the goal.

Troy Terry's point streak ended at 16 games for Anaheim, the second-longest in the NHL behind Connor McDavid's 17.

"It's not like something I think about when I'm out there," Terry said. "I'm almost, I don't know, relieved. It was obviously going to end at some point.

"So, yeah, the biggest thing for me now is prove that it wasn't just a streaky thing. I don't know if starting another is the right way to say it, but just keep playing and show it wasn't just a streak. I wasn't good enough in this game and it showed in the points streak ending and all that. I've just got to be more of a difference-maker every night."

Ducks: At the Colorado Avalanche on Wednesday night.