Hurricanes back home, out to stunt Rangers' momentum 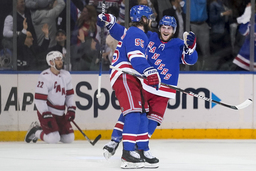 For every bit as good as the Carolina Hurricanes looked in winning all six home games of the current playoffs, they have skated away with a loss in all five contests away from Raleigh, N.C.

Carolina hopes to morph back into the good doctor at home on Thursday when it plays Game 5 of its Eastern Conference semifinal series against the New York Rangers.

The Hurricanes won the first two contests at home in the best-of-seven series before the Rangers stormed back to even the series after a pair of games at New York.

Carolina has outscored the opposition by a 22-7 margin at home in the playoffs and boasts a 94.1 percent penalty kill in its own building. Conversely, the Hurricanes have been outscored 21-8 on the road and are just 16-for-23 on the penalty kill (69.6 percent) following Tuesday's 4-1 loss to New York.

"I am confident eventually they are going to find their way to the back of the net," Carolina's Sebastian Aho said. "We just have to find ways to score. We got to score on the power play."

Carolina failed on both opportunities with the man advantage Tuesday and are 0-for-9 in the series. Igor Shesterkin is responsible for a significant portion of the Hurricanes' troubles, as the Rangers' Hart and Vezina Trophy finalist has yielded just one goal in each of his last three games and a total of five on 122 shots in the series.

"What're you going to do? You have to keep getting the chances. I'm happy that we're creating offense," Carolina coach Rod Brind'Amour said. "(Shesterkin) played well. You have to give him a ton of credit. But the (poor) start is what did it to us."

The Rangers scored twice in the first period and Mika Zibanejad tallied for the second straight game, when he added on in the second period, to send the Rangers on their way to their fifth consecutive home victory.

Zibanejad's five goals are one shy of Chris Kreider for the team lead in the playoffs. Zibanejad also has a club-best 14 points in two playoff series, with 10 of those points (five goals, five assists) coming in his past six games.

Trade-deadline acquisitions Andrew Copp, Frank Vatrano and Tyler Motte also made their presence felt on Tuesday. Copp recorded one goal and two assists, Vatrano had one of each and Motte provided spirited play after being elevated to the third line.

"In the playoffs and in the regular season, they came in and were big factors," Rangers defenseman Adam Fox said. "It's guys with experience and guys who know how to play the right way.

"Up front, you could see what Copper and Frank are able to do. They're skill players, and you can see the jolt of energy we get from Motter when he's in. He's, I think, an underrated part of what we've been doing here in the playoffs. When he came back, it seems like defensively he's all over the ice and killing penalties is huge."

Carolina could face a goaltending dilemma for Game 5.

Former Rangers backup Antti Raanta is 5-4 for the Hurricanes in the playoffs with a 2.09 goals-against average and a .931 save percentage. But regular starter Frederik Andersen has been skating on his own as he bids to make a return from a lower-body injury.