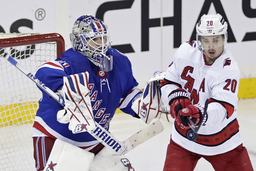 On Sunday, the New York Rangers managed to find more open ice for their offense and then survived a barrage of shots on goal from the Carolina Hurricanes.

As a result, the Rangers have a chance to even the Eastern Conference second-round series at home on Tuesday.

Neither team has scored much in a series that has seen plenty of tight checking after both teams needed seven games to get through the first round. The Rangers have four goals while the Hurricanes have scored five times.

In Game 3 on Sunday, it appeared Carolina was on the verge of taking complete command of the series, especially when it took the game's first seven shots and 13 of the first 15.

New York goalie Igor Shesterkin survived the early barrage and made 43 saves while the Rangers got some production from their top players in the 3-1 win. Artemi Panarin made the long pass for Mika Zibanejad, who scored a power-play goal in the first period and then set up Chris Kreider's goal in the second period.

"I liked the way we battled," New York coach Gerard Gallant said. "... We felt like we were going to win the hockey game. Our goalie was outstanding in the first half of the game and made some big key saves for us. I thought we played well enough to win."

"All three games have been really, really close games," Kreider said. "Could've gone either way and you know, that's playoff hockey. You just got to continue to work for your bounces."

The only bounce Carolina saw go its way was a backhander by Nino Niederreiter that trickled by Shesterkin. Despite their 44 shots being their most of the playoffs, the Hurricanes dropped to 0-4 on the road this postseason.

"I think overall we definitely had our opportunities to win the game," Carolina coach Rod Brind'Amour said. "I would take that game most nights to be quite honest with you."

Carolina's biggest problem continues to be the power play. The Hurricanes mustered seven shots on three fruitless power plays, are 1-for-19 in their four road playoff games and 5-for-43 overall in the postseason.

"It's execution, honestly," Carolina's Jaccob Slavin said. "We've got guys who are skilled. We've had the power play in the past and throughout the season be excellent. We were in the top there for a while. It's just a matter of execution and, honestly, work. We've got to work a little harder."

There may be some lingering tension when the puck drops Tuesday.