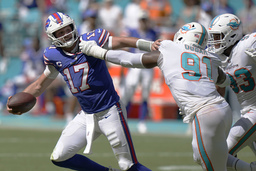 By The Associated Press

The NFL will feature three current division leaders playing on Saturday, Dec. 17, and highlighted by the Buffalo Bills hosting the Miami Dolphins in a prime-time showdown that could go far in determining who wins the AFC East.

The three-game Week 15 Saturday slate announced on Monday will open with the NFC North-leading Minnesota Vikings hosting the Indianapolis Colts, followed by the Cleveland Browns hosting the Baltimore Ravens in a matchup of AFC North rivals.

Buffalo (9-3) regained the AFC East lead over Miami (8-4) this past weekend, but the Dolphins hold the tiebreaker edge over the Bills following a 21-19 win in their first meeting in Week 3.

All three games on Saturday will be broadcast on the NFL Network.

The NFL also altered NBC's "Sunday Night Football" schedule for that weekend, with the Washington Commanders' home game against the New York Giants flexed into the prime-time spot. The switch comes after the NFC East rivals played to a 20-20 tie on Sunday.

The Giants-Commanders' game replaces the Las Vegas Raiders hosting the New England Patriots, who will now play at 4:05 p.m. EST. This marks the third time this season the NFL has flexed its Sunday night schedule.

The New Orleans Saints home game against the Atlanta Falcons, which was in consideration to be played on Saturday, Dec. 17, has now been scheduled for Sunday at 1 p.m. EST.