Beckham to kick off free-agent tour by visiting Giants 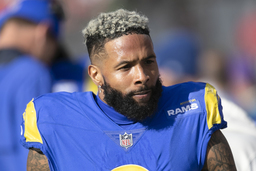 EAST RUTHERFORD, N.J. (AP) Wide receiver Odell Beckham Jr. will kick off what is anticipated to be a three-city free agency tour when he meets Thursday with the New York Giants, the team that drafted him in 2014.

Beckham has torn the ACL in the knee twice. The last time was in the Super Bowl in February while playing for the champion Los Angles Rams. He has been rehabbing the knee all season and is now looking for a job.

The Giants (7-4) have a major hole at wide receiver with veteran Sterling Shepard and rookie Wan'Dale Robinson out with ACL injuries. Kenny Golladay also has not lived up to the big free-agent contract New York gave him last year and 2021 first-round pick Kadarius Toney was traded to Kansas City.

Shepard, who played with Beckham on the Giants for a couple of seasons, believes his buddy's knee is fine. He added the injury was far less serious than the ACL injury that limited Giants running back Saquon Barkley for nearly two years.

"I have no doubt in my mind that he will be able to come back and be the same player that he has always been," Shepard said of Beckham. "This obviously may be a little different but he is very talented, a generational talent. I believe he will come back and be full go."

Beckham, who had 48 catches for 593 yards and seven touchdowns in 12 games with the Rams, is expected to visit the Buffalo Bills and Dallas Cowboys over the next week. The 30-year-old has caught 56 touchdowns in his NFL career.

Beckham had his greatest individual success with New York. He was the 2014 Offensive Rookie of the Year and played for the Giants through 2018 before being traded to the Cleveland Browns. The deal came less than a year after the LSU product signed a $90 million extension with New York.

Beckham tore his ACL in both the 2020 and '21 seasons. He also missed the majority of the 2017 season after breaking an ankle in early October.

"He was obviously a dynamic player there from his freshman year all the way up until he left," McGaughey said. "It was fun to watch him grow, as a young man, as a 17-year old freshman and leaving to become a first-round draft pick and watching him his first few years in the league. He was fun to coach and a super, super talented guy."