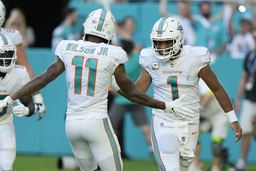 MIAMI GARDENS, Fla. (AP) The last time the Dolphins and Texans met, Miami edged Houston in a turnover-riddled game indicative of the chaotic seasons both teams were having.

For months, Miami and Houston were linked because of the Dolphins' interest in replacing Tua Tagovailoa with controversial quarterback Deshaun Watson. Both teams were also on seven-game losing streaks with one win between them. Miami had five turnovers in the game, Houston four.

"I try to forget those nine (turnovers)," said Houston coach Lovie Smith, who moved up from defensive coordinator in replacing David Culley. "I do remember the game, hard-fought game. There were a lot of turnovers. ... On the offensive side, we just can't turn it over. We don't have a chance against a team like that. We looked at that video, analyzed everything that we did last year."

The Dolphins and Texans, who will meet Sunday in South Florida, now have different coaches and starting quarterbacks (Jacoby Brissett was Miami's starter; Tyrod Taylor started for Houston). They have also been on divergent paths since that game.

Houston is 4-14-1 since then, including a five-game losing streak that the Texans (1-8-1) will bring into Sunday's game.

Miami is 15-4 since that meeting, which seemed to be a turning point for the franchise. The Dolphins have won four straight behind Tagovailoa's electric play and are on pace to make the playoffs for the first time since 2016. The Dolphins (7-3) are second in the AFC East, dropping from first after Buffalo beat Detroit on Thanksgiving. They're fifth in the AFC.

McDaniel, who replaced Brian Flores, said being in first place at this point in the season is "neither here nor there."

"I think there is an element, once you get closer to the end of the season, that you feel pride in controlling your destiny," he said. "I think that is a cool deal. But at the same time, is it totally necessary to achieve your goals? It's not. The point is that you continue to progress."

"What this call says is whenever you're making a change it means things aren't going well," Smith said. "When you're not playing well decisions like this come with it. It's just a part of it all."

Mills, who is in his second year, has thrown seven interceptions and five touchdowns during Houston's five-game skid. The third-round pick from Stanford has thrown for 2,144 yards with 11 touchdowns and an NFL-high 11 interceptions.

The 26-year-old Allen has not played this season and his last appearance came on Dec. 26 of last season while he was with Washington against Dallas.

"We feel pretty confident that he can throw the ball," Smith said. "He's mobile enough and he's earned the opportunity."

The Dolphins' offensive line has played a huge role in their success after struggling early in the season.

Tagovailoa has been sacked twice in the past three games, and the Dolphins are coming off their best rushing performance -- 195 rushing yards against Cleveland.

Veteran LT Terron Armstead and C Connor Williams, both offseason acquisitions, have been a big reason for the offensive line's success.

"Through the ebbs and flows of the season, we feel that at the critical time where we needed to get better, we did," said offensive coordinator Frank Smith.

Smith said rookie running back Dameon Pierce hasn't changed much from the moment he arrived in Houston.

The fourth-round pick from Florida had a tough game last week, finishing with 10 carries for a season-low eight yards. He leads all rookies with 780 yards rushing and 915 scrimmage yards. He needs 85 yards to become the third rookie in franchise history to reach 1,000 yards from scrimmage.