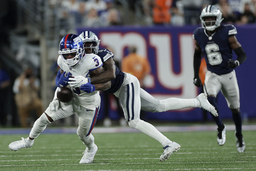 Daboll had indicated after Monday night's game that the injury to New York's leading receiver was serious.

Shepard was jogging down the right hashmark when he suddenly fell to the artificial turf at the MetLife Stadium and grabbed his knee with both hands. He was taken off the field on a cart.

This is the second major injury for the 29-year-old, who is the longest-tenured player on the Giants. He tore an Achilles tendon late last season and managed to rehabilitate it and play on opening day, catching a 65-yard touchdown pass.

Daboll did not say Shepard will miss the rest of the season, but it generally takes a year to recover from an ACL injury. With his injury history and age, Shepard may have played his final NFL game.

Daboll said the Giants (2-1) will try to use the players on the roster to replace Shepard. Receivers Wan'Dale Robinson (knee) and Kadarius Toney (hamstring) both were inactive on Monday, but the coach said they are making progress with their injuries.

Shepard led the with Giants five catches for 45 yards on Monday night. He had 13 catches for a team-high 154 yards and a TD in three games.