Chargers' Herbert hopes to give it a go vs. Jags, Lawrence 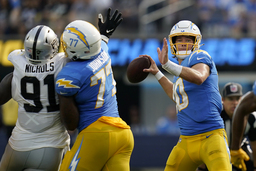 LOS ANGELES (AP) There's plenty to like about a matchup between quarterbacks Trevor Lawrence and Justin Herbert.

Not only are they at the top of the list for the league's best hair, but both are the leaders of their respective franchises.

The biggest question, though, going into Sunday's matchup between the Jacksonville Jaguars and Los Angeles Chargers is if they will face each other for the first time.

Herbert is listed as questionable after not practicing Friday and being limited Wednesday and Thursday due to fractured rib cartilage. The injury happened after he took a hit from Kansas City's Michael Danna during the fourth quarter of last Thursday's 27-24 loss to the Chiefs.

After not making any passes Wednesday, Herbert took his normal amount of throws Thursday during the individual session of practice open to reporters. If he plays, Herbert will wear a rib protector, but could also receive an injection to deal with the pain.

Herbert's status will likely not be fully resolved until Sunday morning.

"There definitely have been improvements," Herbert said about his recovery. "Thankfully, we have a couple of days left before we play. It's up to us and the team to make the best decision so that we're ready to go on Sunday."

Offensive coordinator Joe Lombardi said the game plan will be mostly the same, except for what he described as a handful of plays that would be taken out if Herbert was unable to go.

Herbert's injury has played havoc with the point spread. According to FanDuel Sportsbook, the Chargers opened as seven-point favorites but that dropped to 3 1/2 on Friday afternoon.

"The big thing is him having confidence to be able to go play the game the way that it needs to be played," coach Brandon Staley said of Herbert. "When I say it's day to day, it's how he is feeling."

Chase Daniel would be in line to start if Herbert could not. The 13-year veteran has six career starts, most recently in 2019 for the Chicago Bears.

Jaguars coach Doug Pederson is familiar with Daniel from their time together in Kansas City and Philadelphia.

"I've got a lot of respect for Chase and what he's done. He's been a solid backup wherever he's been," Pederson said. "I know he's going to be prepared whether he plays or not - which means we've got to be prepared for him."

Lawrence and the Jaguars are coming in with momentum after last Sunday's 24-0 victory over Indianapolis. The second-year quarterback has thrived under Pederson and completed 25 of 30 passes for 235 yards and two touchdowns in the win.

"Definitely, there's things that can always carry over depending on the defense you're playing. As far as just your mentality, you kind of have to flip the page," Lawrence said. "You don't just luck into a win like we Sunday. The preparation to get there, the focus, those things, you just replicate it."

Both teams are 1-1 going into the game. The Chargers have won eight of the last nine games in the series.

Herbert isn't the only injury concern for the Chargers. Center Corey Linsley (knee) and right offensive tackle Trey Pipkins (foot) did not play during the second half of the Kansas City game.

Wide receiver Keenan Allen could be back after missing last week's game due to a hamstring injury.

The Chargers and Jaguars were the two most aggressive teams during the offseason to upgrade their defense.

Los Angeles added six starters in the offseason, including acquiring linebacker Khalil Mack and signing cornerback J.C. Jackson. Mack leads the AFC with 3 1/2 sacks and is tied for the conference lead with five quarterback hits.

Rookie outside linebacker Travon Walker became the first top overall pick in league history to record a sack and interception in his first game. Linebacker LB Foye Oluokun, who led the NFL in tackles last season for Atlanta, has 14 stops so far.

The Chargers are averaging a league-low 2.7 yards per carry and have been stopped for no gain or negative yards on 15 of their 55 rushing attempts. They have only one carry that has gone for 10 or more yards.

If Austin Ekeler and Los Angeles' rushing attack are looking to get out of neutral this week, it might be difficult against a Jaguars defense allowing 3.4 yards per carry, fourth best in the league. Jacksonville is giving up only 109 yards after contact, tied for second.

"If you can run the ball, it makes it easier on your offense. We are trying to fix our consistency and be better in our fundamentals," said Ekeler, who had 223 scrimmage yards (112 receiving, 101 rushing) and a touchdown the last time he faced the Jaguars in 2019.

The Jaguars have lost 18 consecutive road games, tied for the eighth-longest skid in league history. They also are 3-15 on the West Coast, giving them the fewest wins in the Pacific Time Zone of any NFL franchise.

Pederson has his team buying into the motto "so what, now what?" in hopes of preventing players from looking behind or ahead.

Lawrence is 0-9 on the road in 19 starts since become the No. 1 overall pick in the 2021 NFL draft. But his slow start puts him in good company. Hall of Famer Peyton Manning also lost his first nine road starts before winning in Week 3 of his second season (1999), 27-10 at the San Diego Chargers.