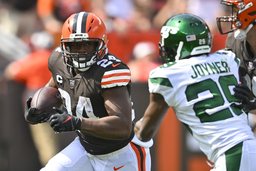 BEREA, Ohio (AP) Nick Chubb pointed the finger at himself, taking the blame for a touchdown run that should have put away the Jets.

Instead, it gave them hope.

"I probably shouldn't have scored right there, honestly, looking back at it," Chubb said. "It cost us the game."

Two days after the Browns collapsed and blew a 13-point lead in the final two minutes to lose 31-30 to New York, Chubb said he made a mistake by going into the end zone for his third TD with 1:55 left.

With the Browns leading 24-17, Chubb took a handoff from the 12-yard line and ran left. He made a cutback, stepped through a tackler and scored to put Cleveland up by 13 and send a raucous home crowd into a frenzy.

Looking back, Chubb wishes he had done things differently.

If he had run out of bounds or been tackled after picking up a first down, the Browns could have simply taken three knees, run out the clock and improved to 2-0 for the first time in 29 years.

Instead, after Chubb's TD, the Browns committed a dizzying array of errors in less than two minutes.

It wasn't until after the game that Chubb realized it could have all been avoided.

"A lot of things went wrong, not just one thing," he said. "But collectively as a unit, as a team we could have all done things different, but it's only a problem because we didn't win. So I probably should have went down."

Of course, Chubb isn't to blame and no one is pointing a finger at the three-time Pro Bowler.

Same for Cooper, who said Tuesday he should have either fielded the squib kick or batted it out of bounds.

The Browns' failure to recognize the situation lies with coach Kevin Stefanski, who made it clear it was his responsibility to close out the win. He appreciated his players' accountability, but isn't passing the buck.

Chubb's willingness to shoulder the loss is hardly surprising. He's one of the team's most-respected players, revered by his teammates for his work ethic and willingness to put the Browns first.

The reserved 26-year-old Chubb said the more he replayed the game in his mind, the more he recognized he could have altered its outcome.

However, he acknowledged that once he got near the goal line, there weren't many options.

"I could have went out of bounds, but people were behind and they would have pushed me in or something like that. I probably should have just dropped down after I made the cut."

What's interesting is that Chubb - and the Browns - were in a similar spot two years ago in a game against Houston. With Cleveland protecting a 10-7 lead, Chubb got loose on a 59-yard run, but instead of scoring, he stepped out of bounds at the 1-yard line and the Browns burned out the clock.

Two years ago, Stefanski had sent in a play called "no mas" to ensure the clock management.

Chubb said he shouldn't have had to be told again.

"We all work together," Chubb said. "We all communicate. But at the end of the day, I've been in that situation before and so I really can't put it on anyone but myself at this point. I think the biggest thing is I was aware of what was going on and I thought the game was over if I'm being honest."

NOTES: Rookie DT Perrion Winfrey returned to practice and expects to play after being disciplined last week and benched against the Jets. Winfrey didn't give any details for his punishment and felt no need to apologize. "I just feel like it was something that I needed to mature," he said. "I feel like I wouldn't be the player that I'm going to be now if it had not happened, so I'm glad that it happened."