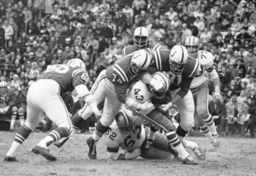 ALBUQUERQUE, N.M. (AP) Don Perkins, a six-time Pro Bowl running back with the Dallas Cowboys in the 1960s, has died. He was 84.

The NFL team and the University of New Mexico, where Perkins was a standout player before his professional career, said Perkins died Thursday. No cause of death was revealed.

Perkins rushed for 6,217 yards in 107 games with the Cowboys from 1961-68, and is fourth on the team's career list behind two Pro Football Hall of Famers - NFL career rusher leader Emmitt Smith and Tony Dorsett - and their current running back, Ezekiel Elliott. Perkins' 42 rushing touchdowns rank fifth in team history.

While he was initially drafted by the Baltimore Colts in the ninth round of the 1960 draft, Perkins had already signed a personal services with the expansion Cowboys. Dallas got his rights after sending the Colts a ninth-round draft pick.

Perkins missed the Cowboys' inaugural season in 1960 because of a broken foot. He rushed for 815 yards in 1961, and finished third in the voting for NFL rookie of the year behind Mike Ditka and Fran Tarkenton. He had a career-best 945 yards rushing in 1962.

Born in Waterloo, Iowa, Perkins played for New Mexico from 1957-59. He was a team captain his final two seasons when the Lobos coach was Marv Levy. Perkins returned to the Albuquerque area after his pro football career was over.

"Don is one of the greatest Lobos, and certainly one of the greatest football players to play for UNM. He was a tremendous student-athlete, and he had a terrific career in the NFL, but he was more than that," New Mexico athletic director Eddie Nunez said. "He came back to New Mexico and worked for the state and was a tremendous ambassador for so many."