49ers' Nick Bosa not worried about lack of contract talks 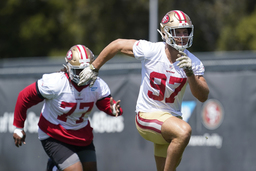 SANTA CLARA, Calif. (AP) Nick Bosa spent his offseason away from the San Francisco 49ers enjoying his new boat and getting into even better shape than before rather than worrying about breaking the bank with his next contract.

After spending the voluntary portion of the offseason working out in Florida with his brother Joey and taking his new boat out on the water for his "extracurricular" activity, Bosa's return to the Niners this week for mandatory minicamp was a welcome sight.

Even though coach Kyle Shanahan said the team has not started negotiations on a new long-term deal with Bosa that could top $30 million a year in value, he expects Bosa to remain in San Francisco for the foreseeable future and Bosa has no concerns about the timing of any talks.

"I've just been focusing on getting better," Bosa said. "I'll let my agent worry about that."

Bosa's value has only grown after he posted 15 1/2 sacks in the 2021 regular season and four more in the playoffs. The Niners already picked up his $17.9 million fifth-year option for 2023 and Bosa will likely look to come close to Aaron Donald's new $31.7 million a year price tag from his new deal with the Los Angeles Rams.

Bosa said he got leaner this offseason when he was able to focus on working out rather than rehabilitating following reconstructive knee surgery that sidelined him for almost the entire 2020 season.

"It was just a better overall offseason, because I was able to enjoy myself a little bit, because I wasn't just grinding and then resting like I needed to for my knee," he said. "Now the knee is doing great. I'm able to go about my life normally, which is nice."

Bosa's return from the knee injury provided a big boost to the Niners last season, giving the team the dominant pass rusher that was missing in 2020.

Bosa built on his Defensive Rookie of the Year season from 2019 when he had nine sacks in the regular season and four more in the playoffs by becoming one of the top defensive players in the game.

So his return to the team this week was a welcome sight.

"It's great to have him here just around the guys," defensive coordinator DeMeco Ryans said. "That's the biggest thing for Nick being around the guys, building that camaraderie during this time here in the offseason. It's about those guys just working together, being out there, going to dinner together, whatever. As much time as they can spend together to become as tight as possible as a defensive unit and as a team, that's what matters most and Nick is looking great."

Bosa said he loved the depth the Niners added on the defensive line this offseason by bringing back Kerry Hyder Jr. after a one-year stint in Seattle, and the additions of free agents Kemoko Turay and Hassan Ridgeway.

The Niners also used a second-round pick on Drake Jackson and Bosa said the Niners may need to use a few extra roster spots to keep all the talented linemen.

Jackson has made an immediate impression on his more accomplished teammates and Bosa was particularly impressed by the way he is able to bend around the edges on his pass rushes.

"He's super talented," Bosa said. "He does things out there that I definitely couldn't do as a rookie, just the way he moves. He's definitely got some impressive stuff about him."