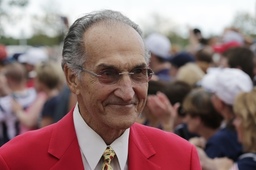 FOXBOROUGH, Mass. (AP) Gino Cappelletti, a former AFL Most Valuable Player and original member of the Boston Patriots who was part of the franchise for five decades as a player, coach and broadcaster, has died. He was 89.

Cappelletti died Thursday at his home in Wellesley, Massachusetts. His death was announced by the New England Patriots on Thursday. No cause of death was given.

"My heart aches after learning of Gino Cappelletti's passing this morning. For the first 51 years of this franchise's history, Gino contributed as an all-star player, assistant coach and broadcaster. You couldn't be a Patriots fan during that era and not be a fan of Gino's," New England Patriots owner Robert Kraft said in a statement. "As great of a player as he was, he was an even better person and storyteller."

Known as "The Duke," Cappelletti played receiver and kicker and scored the first regular-season points in AFL history, a 35-yard field goal in the first quarter of the Patriots' 13-10 loss to the Denver Broncos on Sept. 9, 1960.

He went on to be the league's MVP in 1964 and was one of three players to play in every game in the AFL's 10-year history, along with Jim Otto and George Blanda.

Cappelletti spent his entire career in Boston from 1960-70, ending it as the AFL's all-time leader in points (1,100) and field goals (170). He was honored as the second Patriots player inducted into the team's hall of fame in 1992, joining guard John Hannah.

Following his playing days Cappelletti spent seven seasons in the radio booth (1972-78) before joining Patriots coach Ron Erhardt's staff in 1979, serving as the team's special teams coach until 1981. He returned to broadcasting for the Patriots in 1988 as a radio analyst and remained in that job through the 2011 season.

He is survived by his wife, Sandy, daughters Gina, Cara and Christina, and 10 grandchildren.