Gordon back in Denver but likely flips roles with Williams 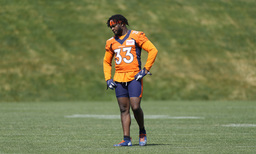 ENGLEWOOD, Colo. (AP) Melvin Gordon III is returning to the Denver Broncos, but it's likely that he'll serve as the second jab in the team's 1-2 punch.

Gordon and rookie Javonte Williams split carries right down the middle last season, each one getting 203 handoffs, but Gordon started 16 games to Williams' one.

The Broncos appear ready to turn over the featured role to Williams, but after Gordon agreed to terms on a one-year, $5 million contract this week, offensive coordinator Justin Outten didn't want to declare his lead back as the team wrapped up its initial minicamp Wednesday.

At first, he said Gordon is "another guy to run the outside zone, third-down situations, just having that 1-2 punch. All those other guys are working their tails off as well. You've got Mike Boone and (Damarea) Crockett. Those guys are really putting in the work, so it's real exciting to get him on the field, as well."

When pressed if Williams was the No. 1 running back and Gordon No. 2, Outten retorted, "I'm not saying that. I'm saying just guys that are gonna be on the field that can change up the game with their pace with fresh legs. It's not necessarily a 1 and a 2 right now."

Hours before Gordon agreed to return to Denver, Williams said he was prepared for whichever role general manager George Paton and head coach Nathaniel Hackett had in mind for him.

"Whatever George has planned, I'm ready. If I have to split carries, or if I'm the starter, it doesn't matter," Williams said. "Whatever it is, I'm just trying to win the Super Bowl."

Gordon, who was expected to take his physical and sign his deal Wednesday, is reuniting with quarterback Russell Wilson, whom he played with at Wisconsin for one season.

That was in 2011 when Gordon was a freshman in Madison and Wilson a senior transfer from North Carolina State.

Russell reacted to the news by tweeting "25!!! We got us a Stable," and the Broncos tweeted an old photo of the pair flashing a "W" sign back when Wilson was playing for the Seahawks.

Wide receiver Tim Patrick was pleased to see Gordon, an eighth-year pro, returning to the Broncos.

"They both ran for 900-some yards last year, right? That's just another piece of the puzzle," he said. "It's gonna be scary this season."