Patriots head into draft looking for youth at LB, WR 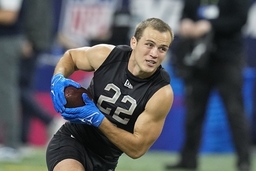 FOXBOROUGH, Mass. (AP) The Patriots were one of the biggest spenders in free agency during the 2020 offseason, uncharacteristically shelling out big-money deals to plug holes on both sides of the ball.

Because of it, they entered this offseason with a much tighter grip on the wallet.

It means Bill Belichick will turn to the draft to bolster a roster that still needs youth all over the field, particularly at linebacker, receiver, on the offensive line and at cornerback.

One of the reasons the Patriots have had so much sustained success during Belichick's era is that they've been able to maintain a core of players who've fit into New England's culture. Those players just haven't consistently come via the draft, where Belichick has had his share of misses.

The Patriots' approach has undergone adjustments heading into this year's draft. Not necessarily because of an overall adjustment in philosophy, but because changes in the college game have resulted in an NFL pipeline that's simply producing different kinds of players than it has in years.

"We're always evaluating all of our processes and the way we evaluate different positions. There's never a `Oh, OK, well this is the way we do things,'" new director of player personnel Matt Groh said. "We're constantly trying to evolve and adapt and trying to find better ways, more efficient ways of going about that."

That will be particularly true at linebacker, a position where New England will be focusing on as it tries to get younger and faster after its first return to the playoffs since Tom Brady's departure ended a loss in the wild-card round.

"It's a different game than it was 20, 30, 40 years ago and that player has also changed. There's not as many of those big linebackers, they just, they don't exist," Groh said. "Colleges want them smaller because they've got to be able to adapt to the college game. So, you can't just create these guys out of thin air and so it's with all the positions, it's what the college game provides us. We have to just take what they are going to give us from year to year."

Alabama's prospect list isn't as deep as years past, but receivers John Metchie and Jameson Williams could be possibilities.

The success of Jones and Barmore made last year's draft was one of the best New England has had under Belichick. But some of the recent early round misses (Cyrus Jones 2016, Derek Rivers 2017, N'Keal Harry 2019) gnaw at team owner Robert Kraft.

At last month's league meetings, he said improving his team's draft shortcomings is the priority.

"More than anything, it bothers me that we haven't been able to win a playoff game in the last three years," Kraft said. "I'm happy that we had, I think, a great draft last year. Made up for what happened the previous four years or so. I look forward to hopefully having a great draft this year. It's the only way you can build your team for long term and consistently that you have a chance at winning is having a good draft."

New England has been notorious for trading back into later rounds of the draft. While they are expected to make more selections than in the past, it likely won't stop them from making a trade or two to add players or extra picks.

In Belichick's 22 seasons, 2004 was the only year the team didn't execute at least one draft-day trade.