Attorney: Cowboys player in SUV from which man was shot 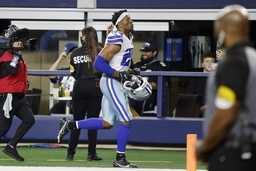 DALLAS (AP) Dallas Cowboys cornerback Kelvin Joseph was riding in a sport utility vehicle from which a man was fatally shot about two months ago, Joseph's attorney said Friday.

Cameron Ray, 20, was shot about 2 a.m. March 18 outside a nightclub in the Lower Greenville entertainment district of Old East Dallas, according to a Dallas police statement.

A newly released surveillance video showed two groups, one of which Ray was part of, engaged in a brief altercation outside the nightspot. The video shows a black SUV drive by Ray's group, and shots were fired from at least one of its windows, wounding Ray. He died a short time later at a nearby hospital.

"Kelvin Joseph did not shoot Cameron Ray," Barry Sorrels, Joseph's attorney, said in a statement Friday. "Mr. Ray's death is a tragedy, and Kelvin extends his deepest condolences for the family's loss."

Joseph "was unarmed and was not looking for violence," Sorrels said. "He found himself in a situation that escalated without his knowledge or consent. Along with condolences to the Ray family, Kelvin apologizes to the Dallas community for being anywhere near this type of incident."

The Cowboys took the former LSU and Kentucky star in the second round of last year's NFL draft.

In a statement, Cowboys officials said they were aware "of the tragic incident."

"The organization is aware of Kelvin Joseph's possible connection to this incident. We are in contact with Dallas law enforcement and have alerted the NFL office," the statement said.

In a statement, NFL spokesman Brian McCarthy said, "The matter is under review of the league's personal conduct policy."