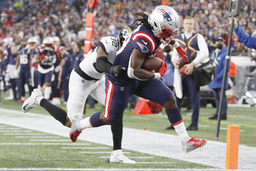 FOXBOROUGH, Mass. (AP) The Patriots squandered an opportunity to lock up the AFC East title in a humbling loss to the Bills last week.

They took out their frustrations on the lowly Jaguars to earn their way back into the postseason.

New England returned to the playoffs when rookie quarterback Mac Jones threw three touchdown passes and Damien Harris and Rhamondre Stevenson rushed for two scores apiece in their 50-10 win over Jacksonville on Sunday.

The victory by the Patriots (10-6) snapped a two-game losing streak and gave Bill Belichick his 20th 10-win season as a head coach, tying Don Shula for the most in NFL history. A loss by Miami at Tennessee secured New England's first trip to the postseason since Tom Brady left for Tampa Bay following the 2019 season.

"We're trying to play as along as we can and get as deep as we can in the playoffs," Jones said. "I realize what we're playing for. ... All the stuff that happens in the future we'll deal with that when it comes."

The Jaguars (2-14) have lost eight consecutive games, including three straight since firing coach Urban Meyer. It was their 17th consecutive loss on the road, the longest streak in the league.

Jones finished 22 of 30 for 227 yards in his first matchup against his hometown team, setting a franchise record for touchdown passes by a rookie with 21. Stevenson had 107 yards on 19 carries. Harris rushed nine times for 35 yards before leaving in the second half with a hamstring injury. He said afterward he was fine.

"We've got more games to play, it's as simple as that," Harris said. "We all believe we've got something special with this team."

Patriots receiver Kristian Wilkerson had two touchdown catches - the first of his career - after being promoted from the practice squad for the second consecutive week. He pulled in a 6-yard TD to put the Patriots up 21-3 in the second quarter. His second came on a 20-yard pass on their opening possession of the second half that stretched the lead to 34-3.

New England's defense also bounced back from a rough outing against Buffalo, holding the Jaguars to 253 yards and 3 of 9 on third downs. Myles Bryant, J.C. Jackson and Kyle Dugger all had interceptions.

It was part of the latest rough outing for Jaguars quarterback and No. 1 overall draft pick Trevor Lawrence, who finished 17 of 27 for 193 yards. He had a late touchdown pass, his first in five games. But it came against mostly backups.

"Obviously, it wasn't a good day," Lawrence said. "Didn't play well, all phases of the game. It sucks. You prepare for the game and to go out there and not perform, it's disappointing. Got to flip the page. ... It's definitely frustrating."

Jones, the final quarterback taken in the opening round of April's NFL draft, now has victories over the top two quarterbacks selected in Lawrence and No. 2 overall pick Zach Wilson.

"There's a lot of circumstances and things that these guys are fighting through. I'm just asking for them to give me their best at all times. That's what we're hoping for," interim coach Darrell Bevell said. "It didn't work out for us today."

Patriots: Along with Harris' hamstring injury, safety Adrian Phillips also left in the second half with a wrist injury. He said the injury was minor.

Jackson's second-quarter interception was the 25th of his career. He is the fourth player in the Super Bowl era with at least 25 interceptions in his first four seasons, joining Hall of Famer Lem Barney (32), Lester Hayes (25) and Everson Walls (25).

And with his 40-yard completion to receiver Laquon Treadwell in the first quarter, Jacksonville's Lawrence set a Jaguars single-season rookie passing yards mark. He needed 47 yards to break the mark set by Gardner Minshew, who threw for 3,271 yards in 2019. Lawrence now holds Jacksonville's rookie records for completions and passing yards.

With the game out of reach in the fourth quarter, Bevell said there was a conversation on the sideline about possibly benching Lawrence in favor of backup C.J. Beathard. Ultimately they decided to let Lawrence finish the game.

"We were able to put a drive together there, and we ended up scoring a touchdown. It ended up working out in our favor," Bevell said. "It was important, obviously, that we protect him and do those things in that drive, but I thought it worked out OK."

Jaguars: host the Colts in their regular-season finale.

Patriots: visit Miami in their finale.