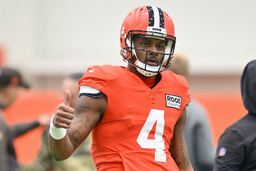 HOUSTON (AP) When Deshaun Watson returns to the field Sunday, it will be in the same stadium where he played his last game 700 days ago.

The disgraced quarterback will make his debut for the Cleveland Browns (4-7) against his former team, the Houston Texans (1-9-1), in his return after serving an 11-game NFL suspension for sexual misconduct allegations.

Speaking for to reporters on Thursday for the first time since August, Watson declined to answer any questions not related to football. He spoke at length about his excitement to play not only in front of Browns fans but Texans fans as well.

"It has been great memories and fun memories," he said of his time with the Texans. "I still have a home in Houston. I still have friends and family still in Houston and relationships that are still there."

It will be his first game since Jan. 3, 2021, when he threw for 365 yards and three touchdowns for Houston in a 41-38 loss to Tennessee. Soon after that, he became unhappy with the direction of the team and requested a trade. Then, two dozen women accused him of sexual harassment or assault during massage therapy sessions.

He remained on Houston's roster last year but sat out all season before being traded to the Browns in March.

Watson agreed to the lengthy suspension, a $5 million fine and to undergo professional counseling and therapy after an independent arbitrator ruled that he violated the league's personal conduct policy.

Watson helped the Texans to two playoff berths in the four seasons before his trade request, becoming a fan favorite before his off-the-field issues began to overshadow his talent.

He was asked what reception he expects in his return to the city where he spent his entire NFL career.

"I am focusing on just being the starting quarterback and executing the game plan," he said. "That is my main focus. I am not worried about the atmosphere."

Watson will face a struggling squad that has lost six in a row and is the NFL's only one-win team.

Some wonder if the 27-year-old Watson will be the player he was before, or if he'll be rusty in his return.

"We're telling our guys we're going to see the best version of Deshaun," Houston coach Lovie Smith said. "I think you go into every game that way. We have no idea. He hasn't played for a long period of time, but we hope there is some rust and all those things."

Watson was asked if he expects the long layoff to affect him.

"Honestly, I am not sure," he said. "This is my first time having time off. My biggest focus is just going out there, and just really whatever (coach) Kevin (Stefanski) calls, make sure I am executing, taking it one play at a time, and let the game come to me, not press or anything like that."

One of the few bright spots of Houston's first nine games was the improvement of a running game led by rookie Dameon Pierce. But in the last two games - both lopsided losses - the Texans haven't gotten anything going on the ground.

The Texans had 36 yards rushing Sunday, their second-worst rushing performance of the season after finishing with a season-low 21 yards against Washington Nov. 20.

Pierce had 772 yards rushing after nine games but has mustered just 8 yards in each of the past two games.

A disappointment for much of the season, Cleveland's defense delivered last week.

It was a positive performance for a unit that has been plagued by communication problems and poor tackling.

"Yeah, little increments here and there," linebacker Jeremiah Owusu-Koramoah said when asked about the improvements. "We still have a lot of stuff to work on and lot of mistakes to fix. From this point, I think we made some little adjustments and we're getting better as time goes on."

After missing three games with a knee injury, Owusu-Koramoah has been a force in the last two, recording 20 tackles, including two for loss.

Cleveland's All-Pro defensive end barely made it through last Sunday's win over Tampa Bay after aggravating a left shoulder sprain suffered when he crashed his car in late September. Afterward, Garrett said he's hoping to avoid surgery - or at least delay it until after the season.

He's been getting extra rest and treatment, which has allowed him to keep playing.

The Texas native has three sacks in four career games against Houston.

Houston quarterback Kyle Allen, who will make his second start Sunday since Davis Mills was benched, knows how dangerous Garrett can be after playing with him for two seasons at Texas A&M.

Allen had a message for Garrett leading up to Sunday's game, in which he'll try to bounce back after throwing two interceptions in his season debut last week.

"Be nice to me," Allen said with a smile.

Houston favors a Cover 2 defensive scheme in which both safeties play deep to take away long throws. It's easier to run against the formation because there are fewer players near the line of scrimmage.

Stefanski said the Texans play Cover 2 as much as any team.

"It's a unique challenge," he said. "It's a scheme that I have seen work at a really, really high level. It keeps you off balance when you can play Cover 2 and keep everything in front of you. Then you can crawl up and play man."

With six games left and as the only team with just one win, the Texans are in position to receive the No. 1 pick in next year's draft.

If they get it, it will be the fourth time they'll pick first and the first since 2014 when they selected defensive end Jadeveon Clowney, who now plays for the Browns.

Their previous No. 1 pick was also a defensive end when they chose Mario Williams in 2006. Houston is in desperate need of a quarterback and may look toward Alabama's Bryce Young or Ohio State's C.J. Stroud.

If they do have the top pick and choose a quarterback, he'll be the second signal-caller drafted first in franchise history, joining David Carr, who was their first-ever draft pick in 2002.

The only other time the Texans took a quarterback in the first round came in 2017 when they traded up to draft Watson 12th overall.